Aspira, the Cork-based consulting and enterprise IT services company, has announced the renewal of its principal sponsorship of Cork City FC for the 2018 season. The sponsorship deal will see the Aspira logo continue to adorn the back of the players’ new Adidas jerseys, which are set to be unveiled today. 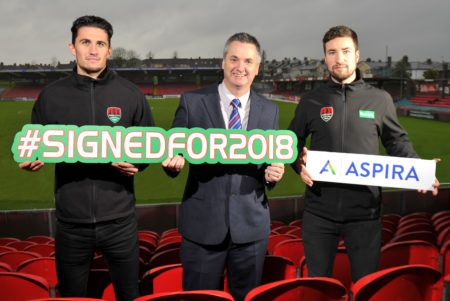 Much like the Rebel Army it supports, Aspira has had a strong 2017. Celebrating ten years this year, the wholly Irish-owned company, which has its headquarters in Little Island, was named by the Financial Times as one of the fastest growing companies in Europe. Aspira has also been nominated as one of Deloitte’s Best Managed companies for 2017 and was ranked in the Deloitte Technology Fast 50 for the fourth year in a row. The company recently opened their new Dublin Docklands office, offering tailored services to the financial services and banking sector.

2017 also proved to be a momentous year for Cork City, with their historic League of Ireland and FAI Cup wins.

Speaking about the renewal of the sponsorship deal, Aspira CEO Pat Lucey said “Over the last ten years, Aspira has been an avid supporter of Cork City FC, and we are delighted to renew our premier sponsorship for the 2018 season. Aspira shares with Cork City FC a commitment to hard work and perseverance, and in 2017, we have seen that dedication pay off for both organisations.”

Mr Lucey continued: “We will be proud to see our logo on the new kit as both Aspira and Cork City FC build on the past year’s many successes.”

Aspira caters for a diverse, international client base, including leading players in the IT, financial services, pharma/medical devices, healthcare and energy sectors. It provides end-to-end IT enterprise solutions including supply and installation of IT hardware and software licensing and support, expert consultancy, design and implementation of bespoke IT solutions and project management.