Fota Wildlife Park, Co Cork is deeply saddened to announce the death of their cherished Rothschild giraffe – Tadgh. He passed away last night from what initially looks like heart failure. He had reached the ripe old age of 16 years and 8 months and was loved by many, Park visitors who admired his grace and calm disposition, but especially by the Rangers who cared for him. 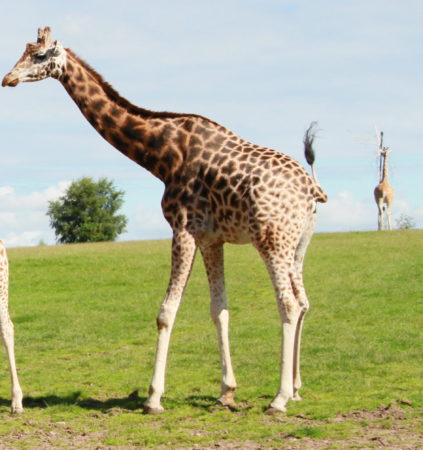 Tadgh was born on the 8th of May 2001 in Hamburg Zoo, Germany and arrived at Fota Wildlife Park on the 20th of May 2004 and since then has contributed greatly to the European Endangered Species Breeding Programmes (EEP) by siring 23 offspring including, Fada, Aoife, Blaithín and the latest Rothschild giraffe arrival, Noinín, who was born in April last year. His progeny also includes 17 “grandchildren”.

Aidan Rafferty, Lead Ranger said today “The Rangers were greatly saddened to discover that Tadgh has passed away during the night and he will be profoundly missed here at Fota Wildlife Park, however, over his long and happy life here, he proved to be a great sire who will ensure his legacy lives on in the many offspring at Fota and other zoological parks’.

Fota Wildlife Park, a non-profit organisation, encompasses 100 acres of land on Fota Island, Co. Cork and is home to a diverse range of animals many of which are endangered or critically endangered in the wild. Through long-established breeding programmes, such as for the Rothschild giraffe, which is run cooperatively with other institutions around Europe and the world, the Park is helping restore populations of some species while protecting the very survival of others. Fota Wildlife Park recently added Asian lions, Indian rhino and Sumatran tigers to the Asian Sanctuary and takes part in the EEP breeding programmes for these threatened species.