IS COLLEGE A WASTE OF MONEY and TIME? New survey reveals 40% of 2016 Level 8 Irish Degree graduates earn than €25k – and Arts leads to the lowest pay with some on €13k!

Cork and Dublin are where most Irish university graduates are employed nine months after graduation as evidence shows that the employment prospects for those with a higher education qualification continues to improve. These are amongst the findings in the latest First Destinations Report, a survey of over 18,000 graduates from the class of 2016, published Friday by the Higher Education Authority. 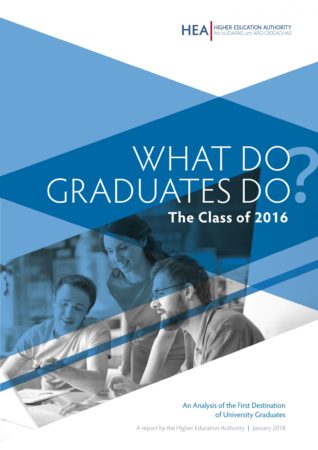 The study shows that 54% of those who graduated from an Irish university with a degree in 2016 are now employed in Ireland, 8% are employed overseas, 31% are in further studies, 3% are unavailable for work and under 5% are currently seeking employment. However, there are significant regional variations in where graduates are employed.

Of all those in employment, 42% are in the Dublin region and 17% in the South West (Cork & Kerry). The regional disparity is highlighted when we see that just 4% of all graduates find employment in the South East; 3% in the Border region and only 2% in the Midlands. While the study does not include graduates from the Institutes of Technology which are significant players in regional development, there is concern that more university graduates are not being employed in the regions.

The general trend in improved employment prospects for graduates has been holding up however and the proportion of graduates now finding work in Ireland is back at pre-recession levels.

Commenting on the report, Dr. Graham Love, Chief Executive of the HEA, said,

“The evidence continues to point to a higher education qualification meaning that you are less likely to be unemployed and tend to have a higher starting salary. There is a challenge, however, for us to create more graduate employment opportunities outside of Dublin and Cork in order to ensure better regional development.”

Dr. Love pointed to the planned development of Technological Universities as one element in addressing this.

The First Destinations study will be extended to cover Institutes of Technology from this year.

HERITAGE COUNCIL: calls for applications from Cork under Community Heritage Grant Scheme
Previous Post
CORK PERSON OF THE YEAR 2017: is Bob Seward, founder of the Cork Academy of Music