Each year the Business Information Systems (BIS) programme in UCC invites students to showcase their creative work, and to express those sides of themselves less visible in their academic studies, in its annual Anthology publication.

Since its inception, BIS has been committed to the personal and professional development of the whole person, and its mission is to help students nurture their own creativity, curiosity, and courage, so that they might forge truly extraordinary careers by seeing, thinking, and acting differently. The annual BIS Anthology, which allows students to share their visual, verbal, and musical talents with each other and with the world, is an important part of this. 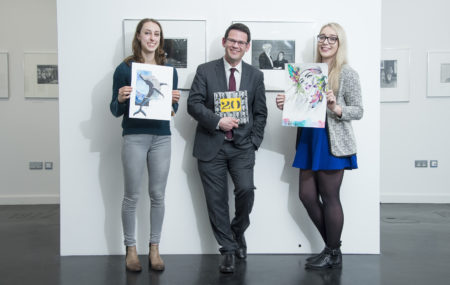 This year sees the popular UCC programme celebrate 20 years of this unique aspect of the BIS experience; and in honour of the anniversary, BIS staff were also invited to contribute work to this year’s edition, together with 48 student submissions. As part of the anniversary celebrations, BIS had also organised a retrospective exhibition of Anthology artwork which ran in the Lewis Glucksman Gallery, UCC in early March.

Speaking at the Anthology launch, Professor Joseph Feller, Head of Business Information Systems said “The creativity to see beyond what is, and imagine what might be. The curiosity to constantly explore, experiment, and discover. The courage to make mistakes, a natural and necessary part of learning and discovery; and the courage to share and express our unique talents and novel perspectives with those around us – these are attributes commonly associated with great artists. They are also the core attributes of great information systems professionals; the individuals whose work fundamentally transforms organisations, industries, and societies”.

“We are proud to acknowledge BIS students, not only for their academic achievements, but also for their diverse talents in the creative arts – art, photography, poetry, creative writing, and music – and we know they will make a great contribution to society, education and business after they complete their studies here with us.”

This, and previous editions of the BIS Anthology, have been sponsored by Bank of Ireland. Speaking about the Anthology, Alan Carroll of Bank of Ireland’s UCC branch, said “At Bank of Ireland UCC, we support and continue to encourage and engage with the students on their journey through college, career and in life. Building on our long-standing relationship with UCC, we are once again proud to sponsor the BIS Anthology. College life is about much more than just academia, so it is encouraging to see so many talented young people involved in this creative publication.”

To learn more about BIS (CK203) in UCC visit www.cubsucc.com.