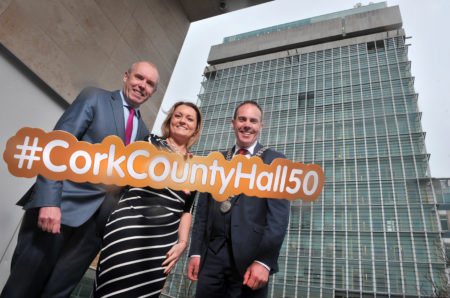 To mark the occasion, the people of Cork were invited to visit Cork County Hall where a special exhibition was launched, telling the story of the building, from Inception to Completion. Mayor of the County of Cork, Cllr Declan Hurley and Chief Executive of Cork County Council, Tim Lucey also unveiled a commemorative plaque to mark the occasion.

Speaking at the event, Mayor Hurley noted the impact of Cork County Hall into the landscape of Cork, “Cork County Hall was built to serve the people of Cork. But this is also a building that has become a cherished part of the environment of Cork.”

Prior to Cork County Hall, staff of Cork County Council were spread throughout the county, with council meetings taking place in the Courthouse on Washington Street. A space was required which would provide a one stop destination for members of the public to transact with the Council. Cork County Hall was this solution.

Taking three years to construct at a cost of £500,000, Cork County Hall was a striking architectural concept which had not been attempted previously in Ireland. When completed in 1968, Cork County Hall was a high rise solution, designed as a single, elegantly proportioned, vertical block with a textured surface of precast concrete tracery which eliminated the need for scaffolding during construction.

Chief Executive of Cork County Council Tim Lucey spoke of the changes which had taken place in the 50 years of Cork County Hall how the principle of public service had remained the same, “Cork County Hall was built to provide a single destination for service provision. We continue to provide services in the way that suits the people we are here to serve. We are now online and able to transact with the people of Cork 24 hours a day, 7 days a week.”

Throughout the years the original distinctive concrete facade became severely eroded. An expansion scheme saw them replaced with an extra storey extending Cork County Hall’s height to 67m with a glazed pavilion offering panoramic views across Cork. The addition of the Cork County Council Library Service Headquarters 2010 was another milestone, bringing a focal point to the County Library for the first time since its establishment 84 years earlier. Cork County Hall campus continues to expand, with the recent opening of the Business Growth Hub, an economic driver for the Cork region and the almost completed Cork County Fire and Building Control Headquarters, site of the former Teagasc offices.

Mayor Hurley’s closing comments noted how the County Architect, Patrick MacSweeney had said, at the official opening, that the success of those involved in Cork County Hall would be judged by the present and future generations. “There was immense pride in Cork County Hall in 1968. That pride remains and if anything has increased. I am confident that future generations will continue to take pride in this building, which is much more than a building. It represents the people of Cork and I for one take great pride in that.”

The exhibition, from Inception to Completion, is currently on display and will be for the next number of weeks.