A group of 10 supermarket workers from Midleton, Co. Cork, who were inspired to begin a syndicate after their colleague recently won €219,472 on Lotto have cashed in after just nine weeks of playing together, winning a tidy €62,271! 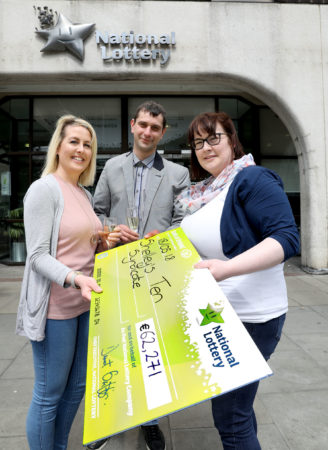 Three members of the new winning syndicate, named “Shelley’s Ten” after the person who set up the syndicate, today picked up their cheque, from the draw last Wednesday (16th May) and were still flabbergasted that the two work syndicates had won in such a short space of time. Pic: Mac Innes Photography

Three members of the new winning syndicate from Hurley’s SuperValu – named “Shelley’s Ten” after the person who set it up – today picked up their cheque from Wednesday’s draw (16th May) in Lotto HQ. They said they were still flabbergasted that two syndicates from the same workplace won in such a short space of time.

The group matched five numbers + the bonus number which this month also carries an additional prize of a holiday voucher worth €20,000. This is the sixth such win as part of the May Getaway promotion so far.

Head of the syndicate, Michelle Smiddy, who works as the scanning office manager at the Supervalu in Midelton, said: “It’s just mental. Our manager got the call on Wednesday night to say we had sold the winning ticket so when I heard I thought that could be us. I checked the ticket using the National Lottery app and the message said to contact the National Lottery claims team. The shop staff just cannot believe it. What are the odds of lightening striking twice here?”

The only difficulty for Michelle was getting her nine colleagues to believe that they had actually won! Michelle also admitted that the joy in seeing their colleagues scoop almost €22,000 each just two months ago was the catalyst for setting up their own Lotto syndicate.

“We were delighted that the girls won and there was an amazing atmosphere in work for the week they won. I just thought that I want to be in on that so I got 10 people together and started playing from the next draw. I never expected to get a big win so early especially as the other Supervalu syndicate were playing for over 2 years. It’s taken us just 18 draws!” Michelle continued.

The delighted group, who were represented in National Lottery HQ by Michelle Smiddy, Karen Sisk and Donatas Tarozas, bought their winning ticket in the Supervalu where they work.