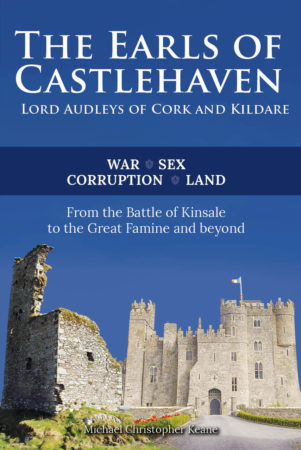 A new Cork local history book on the Earls of Castlehaven has been launched in time for the Christmas market. Authored by retired UCC lecturer Dr Michael Keane, it tells the story of the Earls of Castlehaven or Lord Audleys who played a leading role in Cork and Irish history for close to three centuries extending from the Battle of Kinsale to the Great Famine.

The 1st Earl of Castlehaven was a leading English commander in the decisive Battle of Kinsale in which he was wounded. Residing at Glenbarrahane Castle in Castlehaven, he became one of Ireland’s largest landowners, possessing 200,000 acres throughout Ireland including the historic lands of the O’Driscolls and O’Mahonys in West Cork and the Fitzgibbons of North Cork. The Castlehavens led highly colourful lives, none more so than the 2nd Earl. He married royalty as his wife Anne, eldest daughter of Lord Derby and Alice Spencer of Althorp (of more recent Lady Diana fame), was at one stage heir presumptive to the throne of Queen Elizabeth I. However the 2nd Earl was accused by Anne of extreme sexual depravity and, following a sensational trial, was executed. Remarkably his successor, the 3rd Earl of Castlehaven became a leading commander in the Catholic Confederacy uprising and led the resistance in Ireland to Protestant advancement and to Cromwell. In the 19th century three successive Lord Audleys, which was the family name, were involved in copper mining on their estate in the Mizen peninsula near Ballydehob in West Cork, a venture which was riddled with fraud and corruption. Their estate later became a focal point in the tragedy of the Great Famine in the region. In overall history terms, the story of the lives of the Castlehavens/Audleys helps to illuminate the shifting sands of control and dominance of Irish affairs during many of the key centuries of Irish history.

The book is now available in selected local bookshops as well as online (omahonysbooks.ie, kennys.ie or Amazon) or direct from the author (mjagkeane@gmail.com). Dr. Keane’s first history book ‘From Laois to Kerry’ was winner of the Nilssen Heritage Prize at Listowel Writers Week 2017. He lives in Farran, Co Cork.