Members of the Workers’ Party will put a picket on a meeting of Cork City Council this afternoon (Monday 14th) in support of a demand by Cllr. Ted Tynan that the council retain a site on Model Farm Road for the construction of 100% public mixed income housing. The council management had been proposing to sell the site to private developers.

Councillor Tynan said that while his motion was specific to a particular site there was an urgent and unanswerable case for the council to return to its previous role as the city’s leading builder of homes for all those who require them. 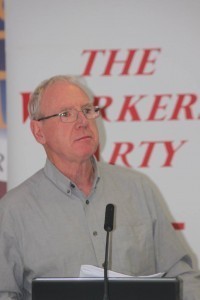 He said there was a real need to challenge the state and local authority’s housing policy, saying: “As far as the state and City Hall management is concerned local authority and state built housing is a dirty word and something which they want nothing to do with, yet all and every initiative they have come up with, inevitably based on a reliance on private developers and landlords, have failed.”

Cllr. Tynan said: “Generations of Cork people have relied on Cork City Council to build homes and thousands of people continue to live in these homes. It is from ideological rather than logistical bias that public housing has all been abandoned in this country and it is time to challenge that.”

Today’s protest, under the banner “Homes for All” will begin at 4.30pm outside the City Hall’s Anglesea Street entrance. All are welcome.