Cobh to mark centenary of the First Dáil Éireann

A commemoration is to be held in Cobh next Saturday (19th) to mark the centenary of the founding of the First Dáil Éireann / An Cheád Dáíl.

The event will be held on Saturday, 19th January 2019 at 3.00pm at the Cobh 1916 Remembrance Garden on West View in the town. The ceremony is being organised by the Cobh 1916 Commemoration Committee. 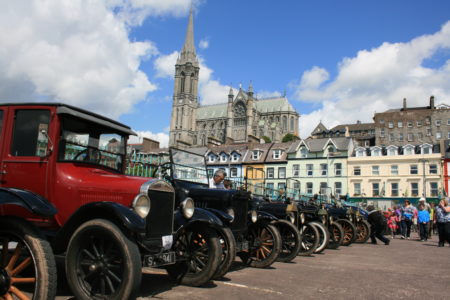 File photo of vintage cars in Cobh. No such large display is planned fro Saturday but there will be vintage wording.

A spokesperson for the group said that it was important to mark the 100th anniversary of An Cheád Dáil as it created the parliament which the overwhelming majority of Irish people had voted for in the 1918 General Election.

He said “Those who set about the establishment of the First Dáil were not merely establishing an all-Ireland parliament but formally declared to the entire world that the Irish Republic as established in 1916 existed in fact. It began the process of seeking international recognition and sought to gain a seat at the table of the conference in Versailles where world leaders were discussing the future of Europe in the wake of the First World War”

“The First Dáil was formed by the republican members of parliament representing Irish constituencies, namely the 69 members elected for Sinn Féin although only 27 members were able to attend as the majority of their fellow TDs were in jail. One of the first acts of the new parliament was to formally adopt a Declaration of Independence which was read into the Dáil record in Irish, French and English and which was circulated to governments and press around the world. This declaration will be read at next Saturday’s commemoration”

The Cobh 1916 Commemoration committee is non-party political and draws its members from a wide cross-section of the local community including historians, musicians, community activists and local business people.