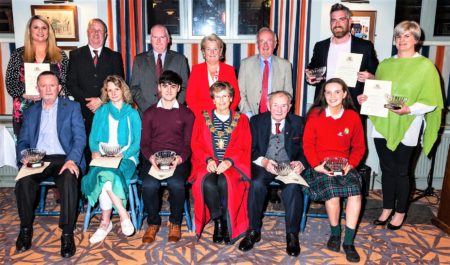 Since its inception in 2014, the Mayoral Council organises two awards evenings per year to pay tribute to local achievers and volunteers in the community who have excelled in their respective fields which makes Clonakilty proud of them.

Four groups and three individuals were honoured at one of these ceremonies on 4th April at O’ Donovan’s Hotel. Mayor Gretta O’Donovan extended a warm welcome to all and the awards – which consisted of an engraved Waterford Crystal Bowl and Scroll with a personalised citation were presented to each honoree.

The Mayor presented the bowls while the other four members of the Mayoral Council jointly presented the scrolls. Before each presentation, the citations were read out which outlined why each honouree was nominated and selected.

Each honouree spoke to thank the Mayoral Council for the recognition and the Mayor concluded the formalities by thanking all involved – in particular the O’Donovan Family of the well known O’Donovan’s Hotel who provided complimentary tea/coffee and finger food afterwards for all in attendance.