Catherine Cullinane from Tuam, Co Galway has won a holiday to South Africa including Safari for two! 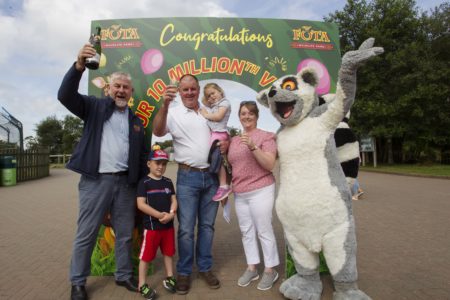 The search for the 10 millionth visitor to Fota Wildlife Park has ended as Catherine Cullinane from Tuam, Co. Galway walked through the gates and scooped the prize of a safari holiday for two to South Africa. Fota Wildlife Park is a conservation and educational charity and the income from the 465,000 people who visit the park annually finances the development and operation within the Park.

Sean McKeown, Director of Fota Wildlife Park today said: “We are delighted to welcome Catherine Cullinane as the 10 millionth visitor here and present her with this magnificent prize of a safari trip to South Africa. We really felt that it was important to mark this occasion as it not only represents a milestone for Fota and also for the region. As one of the biggest tourist attractions in the area, we know from the B&A surveys we regularly conduct that our visitors pay out on average €430 per holiday and contribute €190 million annually into the region on spends that include accommodation, dining and transport. We also feel that it is very important to continually develop the Wildlife Park and during 2019 alone we have spent €900,000 on capital projects such as the Madagascan Village on Palm Walk, and a new playground near the Oasis Cafe.” He continued: “We are a conservation charity and we feel very strongly about giving something back to the visitors, without whom it would be impossible to continue our work in education, research and conservation.”

The runner up prize of a two night stay in a self-catering lodge for a family of four at the five-star Fota Island Resort, with passes to Family Fun at Fota Island Adventure and VIP Spa passes was won by Sadhbh O’Connor from Midleton Co. Cork. The prize from the four-star Radisson Blu Hotel and Spa, Little Island – a two-night bed and breakfast stay in a family room with dinner on one evening for a family of four was won by Marie Pratt from Newcastle in Galway City. The other runner up prize of two nights bed and breakfast stay for a family of four at Midleton Park Hotel with dinner included was won by Dimitar Bonekov from Ballyvolane, Cork City. Fota Wildlife Park also gave Conservation Annual Passes to ten runners up.

Fota Wildlife Park, part of the Zoological Society of Ireland, is located on 100 acres at Fota Island 10km east of Cork City and has an annual attendance of over 465,000 visitors which makes it one of Ireland’s top visitor attractions. As a conservation charity, the vision of the Wildlife Park is to inspire people to understand and protect the biodiversity of the natural world. Fota Wildlife Park’s core values of conservation, education, and research have been instrumental in fostering greater public understanding of the threats to the biodiversity of animal and plant habitats; as well as maintaining some of the world’s most endangered species. Fota is open daily from 10 am, see http://www.fotawildlife.ie for more details.