The Mary Elmes bridge, a pedestrian and cycle bridge linking Merchants Quay and St Patrick’s Bridge, was officially opened by the Lord Mayor of Cork on Friday. The €5 million bridge will be used by up to 11,000 people each day. 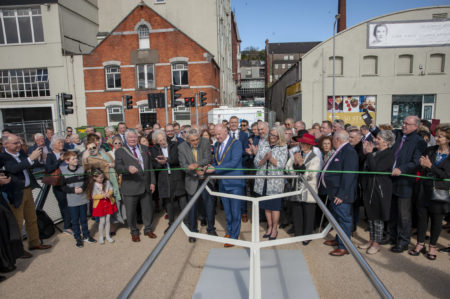 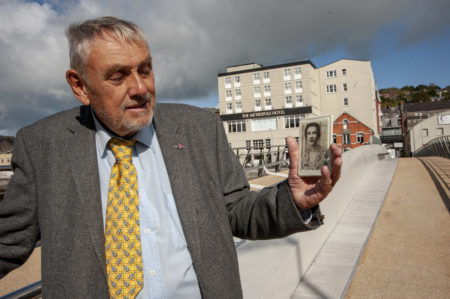 Patrick Danjou, son of Mary Elmes with a photograph of his mother, Mary at the official opening of the Mary Elmes Bridge in Cork.
The Bridge was named in memory of Mary who, with her co-workers, rescued 427 children from deportation to Auschwitz in the autumn of 1942.
Pic: Brian Lougheed 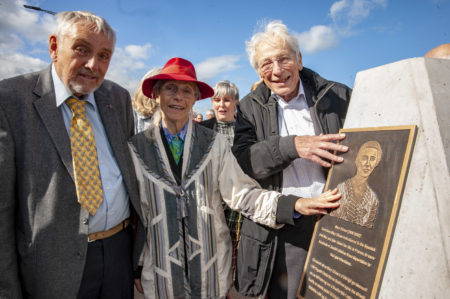 From left: Patrick Danjou, son of Mary Elmes with Charlotte Berger-Greneche and Georges Koltein, who, as children, were rescued from deportation to Auschwitz, from a holding camp for Jews in South West France at the unveiling of a plaque in memory of Mary Elmes.
The Bridge was named in memory of Mary who, with her co-workers, rescued 427 children from deportation to Auschwitz in the autumn of 1942.
Pic: Brian Lougheed

It was named in honour of aid worker, Mary Elmes following a public vote which culminated in a vote by Cork City Council Elected Members. It was the first time this process has been used to name a piece of public infrastructure in Cork. Hailed as Ireland’s Oskar Schindler, Cork woman, Mary Elmes is credited with saving the lives of hundreds of Jewish children during the Holocaust by hiding them in the boot of her car so they escaped death camps.

Lord Mayor, Cllr John Sheehan said: “We must remember today that it was the ordinary people of Cork who decided to name this bridge after Mary Elmes. The general public and the City’s Elected Members chose to honour Mary Elmes’ unstinting courage, her values and her deep humanity. Already, the naming of this bridge after Mary has helped to spread the story of Mary Elmes in Cork and in Ireland and that in itself is a wonderful achievement”.

The bridge, which was delivered by the Strategic Infrastructure Directorate, will promote greater use of cycling and walking amongst people travelling between the City Centre and MacCurtain Street. It was funded by the National Transport Authority (NTA) and European Union Designated Urban Centre Funding from the Southern Regional Assembly.

The official commemorative plaque on the bridge was sponsored by the Cork Hebrew Congregation.

Charlotte Berger-Greneche and Georges Koltein, who were saved by Mary as children, travelled to Cork for the event. The bridge opening also became an unofficial reunion of the Elmes family with up to 25 members of the wider family – including Mary’s son, Patrick Danjou – at the official event.

Mary Elmes woman is the only Irish person honoured as ‘Righteous Among the Nations’ by the State of Israel in recognition of her work as an aid worker in the Spanish Civil War and in World War Two.

Journalist and documentary maker, Paddy Butler who made a TG4 documentary on Mary Elmes and journalist and author, Clodagh Finn who wrote ‘A Time to Risk All’ on Ms Elmes were also present.