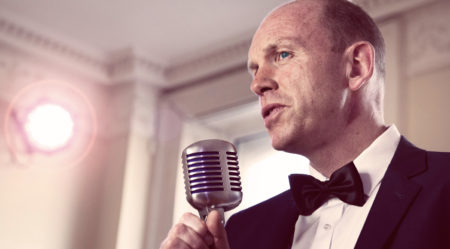 Few artists have had more influence over popular music than Frank Sinatra. For nearly 60 years his impact was unequalled and he remains one of the true musical icons of the 20th century.

To coincide with the Jazz festival this year, the Cork public will have a unique opportunity to experience a theatre event which has been created to showcase the artistry of Frank Sinatra. Staged at the recently renovated Rory Gallagher Theatre at CIT, this multimedia show will bring the audience on a unique journey into the musical world of Frank.

Using the original authentic arrangements and an engaging narrative style of delivery, this show will appeal to anyone who wants to know more about the life and artistic brilliance of Frank Sinatra. The opening scene begins in the Rustic Cabin where he first performed as a singing waiter and finishes with his legendary stadium tours of the 70s and 80s.

In between, the audience will relive his early big band days, his Hollywood career, the Capitol studio sessions, Vegas, the Rat Pack years and many other elements of his star-studded career. In total, over 16 of his most loved songs will be magically recreated and performed on stage.

Written and performed by CIT Lecturer and Frank Sinatra Impersonator Jim O’Mahony and supported by the Arts Office in CIT, this show premiered to a sell-out audience as part of the Life-long learning festival earlier this year. This is a rare chance to see this unique and immersive theatre event again and a perfect way to kick start the Jazz festival.

When: Performances will take place on October 24th and 25th at the Rory Gallagher Theatre, Cork Institute of Technology, beginning at 7.30pm sharp
Tickets: €10 here