Minister of State at the Department of Health Jim Daly TD, on Monday, officially opened the new Bon Secours Cork Cancer Centre, marking the completion of the wider €77 million expansion of the hospital.

The new Bon Secours Cork Cancer Centre now offers the most technologically advanced radiotherapy services in the south of Ireland through a partnership between the hospital and UPMC Hillman Cancer Centre, part of US-based academic medical centre UPMC which is affiliated with the University of Pittsburgh. With medical, surgical and radiation oncology all under one roof, the new centre is a holistic cancer offering that is providing integrated cancer care, including rapid screening, timely diagnosis and advanced treatment. 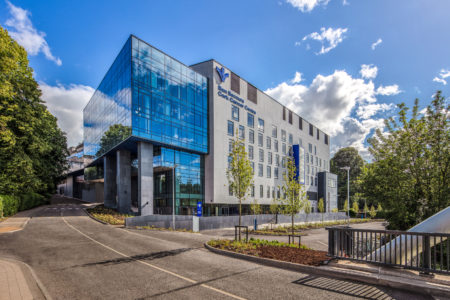 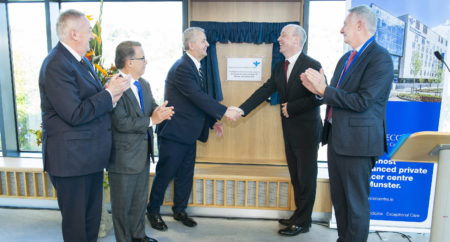 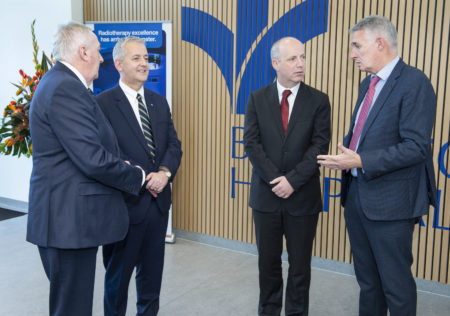 Speaking at the official opening, Minister Daly acknowledged the enhanced healthcare services the expansion now provides to patients in the region. “This is a very positive development for Cork and the wider Munster region, with patients locally, who previously would have had to travel to Dublin for advanced radiotherapy services, now able to receive this critical care closer to home. The Bon Secours Cork Cancer Centre offers care that is second-to-none in terms of state-of-the-art screening, diagnosis and treatment in the region. Bon Secours Cork is already renowned for the excellence and high standards of its care, and I congratulate all involved at the hospital for making this incredibly ambitious expansion a reality.”

Bill Maher, Group CEO of the Bon Secours Health System, said: “We are extremely pleased that the Minister has been able to join us here today, with his visit marking the completion of a ground-breaking €77 million project that began back in October 2017. Now two years on, Bon Secours Cork is a state-of-the-art hospital that is fully equipped to offer patients best-practice, technologically-advanced radiotherapy services that were previously unavailable in the region. In conjunction with the wider expansion of our medical care here, Bon Secours Cork will be further able to meet the diverse healthcare needs of the people in this region and beyond. Part of Bon Secours Health System’s €150 million investment in all our hospitals in line with our ambitious 2020 Plan, this redevelopment builds on Bon Secours’ strong tradition of combining the latest medical technologies and approaches with compassionate and personalised medical care delivering Advanced medicine, Exceptional Care.”

Harry Canning, Hospital Manager at Bon Secours Hospital Cork, said: “These advanced cancer services have been complemented by a wider expansion of our healthcare services, which we are delighted to say are covered by all major medical health insurers in the Irish market. The additional 81 private rooms, 4 operating theatres and new state of the art Critical Care Unit will enable Bon Secours Cork meet our ever increasing demand for existing services and give us the capacity to bring new services on board in the future. This extensive development is a huge milestone for healthcare in the Munster region and is a very exciting time for Bon Secours Hospital Cork.”

Patients now have access to advanced radiotherapy services in Bon Secours Cork that were previously unavailable in the region, including Stereotactic Radiosurgery (SRS), a non-surgical radiation therapy that uses concentrated radiation beams in high doses to destroy tumours in hard-to-reach areas of the body, while minimising damage to surrounding healthy tissues.

“For more than a decade, UPMC has been increasing access to scientifically proven cancer treatments in Ireland. This latest partnership with Bon Secours Cork underscores our commitment to providing the best possible care to patients close to home,” said Charles Bogosta, president of UPMC International and UPMC Hillman Cancer Centre, which has more than 70 locations in the U.S., Ireland and Italy.

Building on Bon Secours’ established track-record in cancer treatment, including 21 years of clinical trials, the new Cancer Centre also features a state-of-the-art oncology department and an innovative onsite Pharmacy Compounding Unit, which enables preparation of specifically tailored chemotherapy for individual patients. 50 new jobs have also been created with the opening of the Cork Cancer Centre.

Bon Secours Hospital Cork is currently one of the largest employers in the region employing over 1,100 staff and holding a number of quality accreditations including JCI (Joint Commission International), INAB (Irish National Accreditation Board), Bariatric Surgery and ESMO (the European Society for Medical Oncology accreditation). The extensive €77 million expansion is the largest ever investment undertaken by the Bon Secours Health System and is a key part of its overall €150 million investment in its healthcare services across Cork, Dublin, Galway, Limerick, Tralee and Cavan.