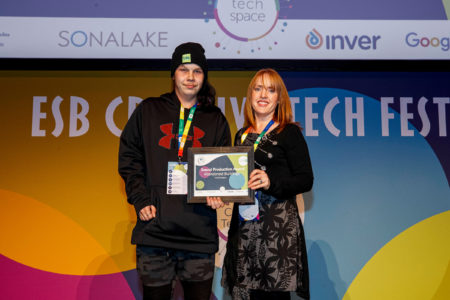 Anthony Harris Cotter, YMCA West Cork is presented with the BEST SOUND PRODUCTION award for his work “Abandoned Buildings” by Bríd Breathnach from Department of Culture, Heritage and the Gaeltacht at ESB Creative Tech Fest

YMCA West Cork were celebrating after one of their young members was honoured for his creativity at the 2019 ESB Creative Tech Fest, which took place in the Convention Centre Dublin on Wednesday, October 30. Anthony Harris Cotter claimed the coveted Best Sound Production Award in the Digital Creativity Category for his project ‘Abandoned Buildings’ (image attached, caption below).

Over 500 young people, aged between 10 and 18, from 50 youth groups across Ireland, attended the bilingual event which celebrates the innovation, creativity and collaboration of young people who participate in TechSpace hubs in local organisations and schools across Ireland. The awards, hosted by Jess Kelly of Tech Talk on Newstalk, honoured winners in the areas of Creative Computer Science, Digital Creativity and STEAM.

There was more West Cork involvement on the day with last year’s ESB Creative TechSpacer of the Year, Alicia O’Sullivan from Skibbereen, one of three inspirational young people who spoke at the event, highlighting the positive impact TechSpace has had in their lives. Alicia recently represented Ireland at the UN Climate Action Summit in New York.

TechSpace is a STEAM and Digital Creativity-based educational programme that helps young people develop key 21st century skills in areas such as creativity, collaboration and critical thinking. The programme empowers them to be active creators, not passive users, of technology.

Attendees at the event participated in more than 30 workshops including AR, VR, electronics, sound engineering, mobile journalism and coding.

Pat O’Doherty, Chief Executive of ESB, commended the projects on display: “ESB is very proud of our partnership with TechSpace, who are one of a number of organisations that ESB support as part of our Generation Tomorrow STEAM Education programme. It’s both reassuring and inspirational to see the level of innovation and collaboration evident in the projects showcased at today’s event.”

The Government Chief Whip and Minister of State for the Irish Language, the Gaeltacht and the Islands Seán Kyne T.D. welcomed the increase in participation from TechSpace groups in Gaeltacht areas. “We are delighted to be involved in the biggest ESB Creative Tech Fest yet, with over 100 young people travelling from Gaeltacht youth groups, showcasing the work they delivered within the Clár TechSpace, in STEAM and Digital Creativity through Irish. It is great to see TechSpacer of the Year being awarded to Adam Ó Cuinneagáin from Coláiste an Eachréidh, a Gaelscoil in Galway.”