The former librarian and mother of five, originally from Cork City, received the Centenarian Bounty issued by the President of Ireland and saw her milestone birthday honoured with a special celebratory mass and a ‘This Is Your Life’ style look back on her 100 years. 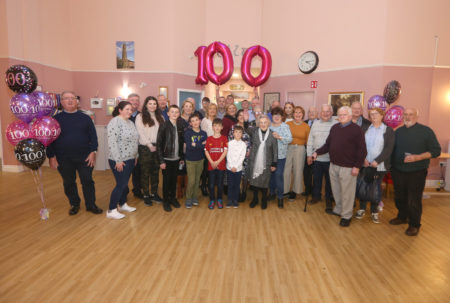 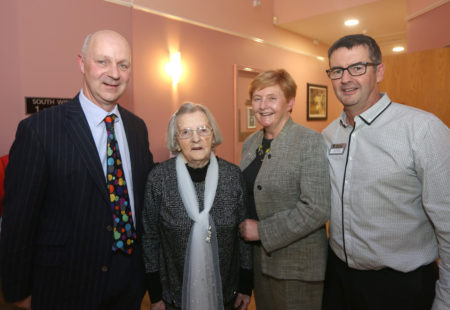 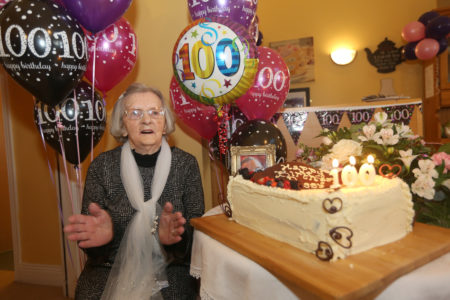 The birthday girl, who has been resident at Oaklodge since April, gave an impromptu speech thanking all her guests for attending and sang ‘How Great Thou Art’ not once but twice during her special birthday mass.

She told everyone that the secret to her long life was, “Prayer, prayer, and going to mass every day.”

Peg, nee Margaret Mary Morrissey, was born in Cork on November 21, 1919 to her parents Paddy and Edith Morrissey (nee Dalton). She had three brothers, John, Stephen and Anthony, and two sisters, Josephine and Kitty, and is the only surviving member of her immediate family.

She met her husband, Laurence Curtin, at a dancehall in Cork City and the couple, who wed in 1942 during World War II, moved to Limerick soon after their marriage and later returned to Cork to settle in Blarney. They had five children, Edith (died 2011), twins Phyllis and Sheila (died 2017), Paddy and Joy.

Peg, who lived independently until she was 98 years of age, is described by her daughter, Phyllis as a devout Catholic who has always been a very active, positive minded person.

Phyllis, who resides in Cork City, said she was not overly surprised to see her mother reach 100 years of age as she has enjoyed good health throughout her life. She added however that she was delighted to see her mother achieve the Centenarian milestone in the care of the Oaklodge Nursing Home staff.

“My mother has always had great health. She always took her vitamins and was very tuned in to what she should be eating and she had a healthy diet with lots of fruit and veg. She was a devout Catholic all her life and was very involved with the Church, and still is to this day.

“She has also always had a very positive outlook on life, she read a lot in the past and never let things bother her; she just got on with life. She was very independent but has always enjoyed meeting people and is still very chatty,” Phyllis said.

Peg, who has been resident at Oaklodge for the last seven months. The nursing home, which specialises in care for persons living with memory loss, announced multi-million euro plans earlier this year to develop Ireland’s largest memory care village at its East Cork premises near Cloyne.

The home’s expansion which will take place over the next year, has come about due to an increase in demand with an on-going rise in the number of older people living with dementia in Ireland, and is also in response to the government’s call earlier this year to develop more independent living spaces for older people in care.

Katherine Doran, Clinical Director at the family owned and run residential care home, said she was delighted to see Peg celebrate her 100th birthday in the home’s care.

“Peg is a wonderful lady who is very connected to her family and fellow residents and this is a very special occasion for us here at Oaklodge. Centenarian birthday celebrations don’t happen too often in care settings but research shows that people who have a strong connection with their community live longer, healthier, happier lives and that’s what we aim to facilitate for those in our care at Oaklodge,” she said.

Peg’s birthday celebrations were attended by her children, grandchildren, extended family, friends and fellow Oaklodge residents. A special celebratory mass was held on the day by local parish priest, Fr. Pat Linehan, before Cllr Noel Collins presented Peg with the Centenarian’s Bounty, describing her as “a role model to all who hope to live a healthy, happy existence.”

Peg’s daughters Phyllis and Joy presented a ‘This Is Your Life’ style showcase of photographs and stories of Peg’s 100 years and Peg, who received a birthday cake and bouquet of flowers from Oaklodge staff, thanked everyone for attending.