At the end of the week Cork County Council signed contracts with two Irish firms, Jon Civil Engineering Ltd and John Cradock Ltd, for the construction of the long-awaited Baile Bhuirne to Macroom Road Development, signalling the expected commencement of works before the end of the year. Contracts were signed in the presence of An Tánaiste Simon Coveney TD and Minister Michael Creed TD.

With funding approved by Government in October and a total budget of €280m, the development is expected to take between three to four years to complete.

The 22 km of new road commencing at the Cork side of Macroom at Coolcower, will bypass the town of Macroom, the villages of Baile Mhic Íre and Baile Bhuirne, the infamous ‘Ballyvourney Bends’, and will finish west of Baile Bhuirne before the County Bounds with Kerry.

The development is expected to bring a significant economic boost to the area during the construction phase and in the longer term reduce journey time in the region, improve access to rural areas and greatly enhance quality of life for people living in and around Macroom.

Mayor of the County of Cork Cllr. Christopher O’Sullivan welcomed the signing, saying, “This development has been in the pipeline for a number of years and we are delighted to see it progress to this stage. It will be a significant improvement in road safety and journey times on the N22 and will enhance connectivity between Cork and Kerry. The N22 By-Pass will free towns and villages of congestion allowing them to grow and rejuvenate promising significant benefits for the people of Macroom, Baile Mhic Íre, Baile Bhuirne and surrounding areas.”

Chief Executive of Cork County Council Tim Lucey commented, “Signing the N22 Macroom By Pass contract marks a significant step for the Cork Kerry region. Advancing such a major piece of strategic infrastructure to this point is a complex process and this is an extremely important development for the entire region. The construction phase will mean an economic boost locally and substantial social and economic benefits for the future. Preparatory works by engineers including ground investigations and archaeological excavations have been carried out and the route is primed for construction. Now that the construction contracts are signed, the commencement of this long awaited and critically important infrastructural scheme and the largest single investment by government in this region to date will soon begin.”

Chief Executive Officer of Transport Infrastructure Ireland Michael Nolan went on to say “…[the] contact signing highlights the importance of delivering on needed national road infrastructure improvements for both the Cork and Kerry regions.” 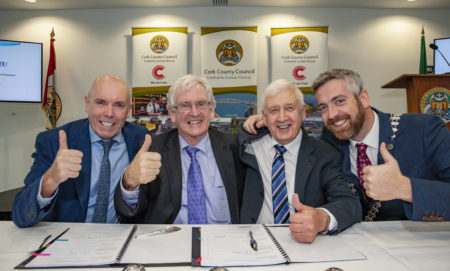 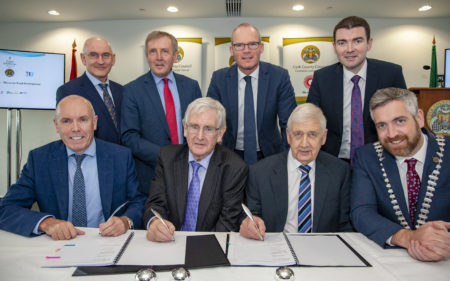