Cork City to be focus of 1920 centenary events

Minister for Culture, Heritage and the Gaeltacht, Josepha Madigan T.D., Tánaiste Simon Coveney T.D. and Minister David Stanton T.D. announce a significant Decade of Centenaries (which incidentally uses a .com domain, probably to appeal to the US market) programme for 2020

The Minister for Culture, Heritage and the Gaeltacht, Josepha Madigan T.D. has announced a significant Decade of Centenaries programme in 2020, including a major commemorative programme in remembrance of the significant events that occurred in Cork City and throughout the county in 1920. Minister of State for Equality, Immigration and Integration, David Stanton, T.D. also spoke at the announcement in Cork City Hall. 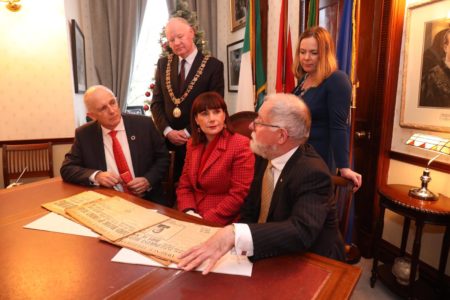 The main focus of the State Commemorations programme during 2020 will be in Cork. During the year, the transformative events that occurred 100 years ago will be marked including: the deaths of two of the city’s first citizens, Tomás Mac Curtáin (March) and Terence MacSwiney (October); the Kilmichael Ambush (November) and the burning of Cork City (December).

As with all other national commemorations, the programme will be delivered in partnership between the Government, led by the Department of the Taoiseach and the Department of Culture, Heritage and the Gaeltacht, and local authorities, in this case Cork City and County Councils. There will also be important contributions from the Defence Forces, An Garda Síochána, the Office of Public Works and other public service organisations. The overall Government investment in the Cork commemorative events in 2020 will be up to €1 million.

Other significant centenaries that will be remembered in 2020 in events around the rest of Ireland and abroad include: The 1920 local elections (January and June), the Connaught Rangers Mutiny (June), the Burning of Balbriggan (September), Bloody Sunday (November), and the execution of Kevin Barry (November).

A wide range of other commemorative initiatives will also be taking place during 2020 including: a series of public lectures, a continued programme of bursaries for artists and writers, exhibition of the Women’s Pop-up Museum and a Decade of Centenaries Irish History Competition for schools.

The State’s objective is to ensure that the centenary of the Struggle for Independence is remembered with an appropriate, meaningful, proportionate and sensitive programme, which recognises the legitimacy of all traditions and values mutual respect and historical accuracy.

As the Minister responsible for leading the Decade of Centenaries programme, my role is to create opportunities that encourage people of all traditions to explore the differing perspectives on our shared history in a respectful environment. My aim is to provide a supportive structure that ensures that the very difficult events that occurred during the Struggle for Independence are remembered within communities in a measured and non-partisan manner that promotes respectful remembrance and reconciliation.

The 2020 programme will have a broad scope, which acknowledges the military activity during the Struggle for Independence, as well as the many other dimensions interwoven with the conflict, including political, social, cultural and economic aspects. It focuses on the significant democratic achievements of the period, in putting in place a new parliament and the new administrative structures of the State.

I look forward to continued engagement and partnership, throughout 2020, with the many stakeholders including our national cultural institutions; local authorities; learning institutions; custodians of records; the trade union movement; the media and creative communities who are delivering commemorative initiatives of great depth, creativity and integrity. Thoughtful and sensitive participation will be critical in supporting the national conversation about the events that took place 100 years ago, by encouraging responsible, inclusive and authentic citizen engagement and debate, which is respectful of the local context.

I am delighted to announce that a major commemorative programme will take place throughout the year, hosted by Cork City Council, in collaboration with Cork County Council and with significant State recognition, support and participation. This will include a major commemoration with State ceremonial elements, a community participation event and a series of civic events, including exhibitions and supports for communities, in exploring and reflecting upon the events that took place in Cork City and Cork County in 1920.

Cork City Council will be involved in most events

The Decade of Centenaries programme for 2020 includes, but is not limited to, the activities outlined below. The programme will continue to evolve as additional initiatives are confirmed and announced.

– A major programme of commemorative events will take place with State support, in Cork City and County in 2020 to mark the significant events that occurred a century ago, including the deaths of two of the city’s first citizens and the burning and rebuilding of Cork City. The programme will include a State commemoration, a community participation event and a series of civic events including exhibitions and support for communities and schools. Cork Public Museum, Cork City and County Libraries and the Crawford Art Gallery will all have significant roles in encouraging inclusive, meaningful and appropriate public discussion and analysis.

– Continued support for local authorities in 2020 in recognition of their leading role in supporting and driving community-led commemoration, augmented with appropriate State acknowledgement, support and participation. The community-led model will be adopted, in collaboration with other key stakeholders, in the observance of a number of the centenaries occurring next year, including Bloody Sunday, the execution of Kevin Barry, the Connaught Rangers Mutiny, the sacking of Balbriggan and the 1920 local elections.

– Continued support to encourage artistic and creative expression in remembrance of the events of this period and all who suffered and those who lost their lives.

– The Markievicz Award programme of bursaries for artists and writers, in recognition of the legacy of Constance de Markievicz, will continue to be funded by the Department of Culture, Heritage and the Gaeltacht and administered by the Arts Council in 2020.

– Continued support from the Department of Foreign Affairs and Trade for cross–border, cross-community and reconciliation-focused projects in Northern Ireland, including through the Reconciliation Fund, with an emphasis on remembering the events of this phase of the Decade of Centenaries in a way that is supportive of mutual understanding on the island of Ireland.

– Continued partnership with the National Cultural Institutions, in recognition of their significant role as custodians of our history and culture; creating opportunities for people of all traditions to reflect upon the complexities of the events of this period and related themes.

– Support for a series of public lectures in 2020, focusing on the emergence and development of nascent political and administrative structures. The Department of Housing, Planning and Local Government has a leading role, in partnership with the Department of Justice and Equality, and other stakeholders.

– Continued support from the Department of Foreign Affairs and Trade for the Irish embassy network to ensure that appropriate recognition is given to the international dimension and the role of the Diaspora in the events of this period.

– Continued exhibition of the ‘Pop-up’ Museum, 100 years of women in politics and public life curated by historian Dr Sinéad McCoole.

– Continued support from the Department of Culture, Heritage and the Gaeltacht for a suite of digital offerings developed by RTÉ and UCC to complement the UCC publication, ‘The Atlas of the Irish Revolution’ and RTÉ’s three part documentary series Revolution based on the publication.

– Continued funding from the Department of Culture, Heritage and the Gaeltacht to support the distribution to schools of the 2020 supplement in The Irish Times Century series.

– Re-establishment of the Decade of Centenaries Irish History Competition for primary and post-primary schools for 2019/2020, sponsored by the Department of Education and Skills and University College Cork School of History.

– The Military Service (1916-1923) Pensions Collection Project remains a key priority for the Department of Defence and the Military Archives.