The final litter survey for 2019 from business group Irish Business Against Litter (IBAL) has shown Cork City Centre to be clean for the 7th year in a row, as is previous winner Fermoy and Midleton. Cork Northside is still ‘littered’ in 39th spot in the ranking of 40 towns and cities, while Mahon has improved to ‘moderately littered’ According to IBAL, there is significantly less litter on our cities’ streets compared to a decade ago. 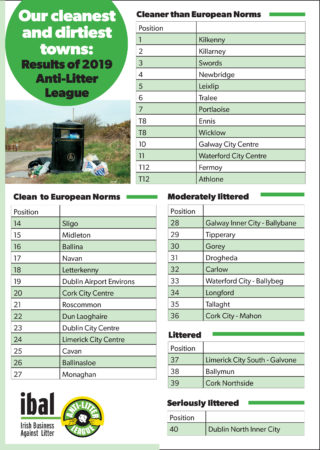 Kilkenny topped the IBAL litter rankings for a record 4th time, having last won in 2014. It finished ahead of Killarney, which was 3rd in 2018, and Swords at the top of the table. In all, 21 of the 27 towns inspected were deemed clean, a great result but down on previous years. Galway edged out Waterford to claim cleanest city as it enters its year as European City of Culture.

The past decade has brought a 13% reduction in litter levels in our city centres, while litter in towns has remained constant over the same period. “We’ve seen the fruits of the greater attention given to keeping our city centres clean,” explains Conor Horgan of IBAL, “to the point where they are now almost as clean as our towns. In 2019, for the first time, all were deemed clean.” IBAL has been surveying disadvantaged city areas over the past 5 years but has seen little reduction in litter over the period. “Unfortunately, the gap in cleanliness between these neglected areas and the high-profile city centres is not closing.”

An Taisce, who conduct the surveys on behalf of IBAL, revealed that only 1 of 25 sites surveyed in Cork Northside was clean.

Sweet wrappers, chewing gum and cigarette butts remain the most common forms of litter on our streets. “Perhaps no one item illustrates the link between litter and the broader environment better than the cigarette butt,” contends Conor Horgan. “Cigarette filters are essentially single-use plastic which readily winds its way into our sewers and rivers, adding to the problem of plastic pollution, which threatens to see more plastic in our oceans than fish by 2050.  Yet every day we see people nonchalantly flicking butts onto our pavements.”

From next year, an EU directive will force tobacco manufacturers to cover the cost of cigarette butt collection and processing in an effort to drastically reduce the numbers of cigarettes disposed of in the environment. “Alongside regulation, we would like to see active recycling of butts, which would encourage their proper disposal, as once a butt is littered on the ground, it cannot be recovered.” Irish start-up NoButts.ie is turning butts into cellulose acetate for re-use in sunglasses and other products and is looking to set up supply arrangements with local authorities.

An Taisce comments on Cork areas:

“A sense of community is very much in evidence in Fermoy, winner of the League last year.  Clearly the Tidy Towns group is a very active one, not just with regard to litter but also in terms of awards for shop fronts and relating to items of history within the town e.g. information notice on history of Mart Car Park.  With so many top ranking sites, a few deserve a special mention e.g. Fermoy Town Park (always an exceptionally well presented and maintained environment), O’Neill Crowley Quay and Patrick Street.  The one area which brought down the overall appearance of Fermoy was the recycle facility beside Mart Car Park (by far the most heavily littered site in the town). The recycle facility in the Library Car Park was also littered.”

“A good result for Midleton, which was brought down by a couple of heavily littered sites. Top ranking sites included Midleton Town Park (a beautifully maintained town park environment), Market Green Shopping Centre and The Main Street – these sites were not just clean but were well presented and maintained.  The Clothing Recycle Facility at Distillery Road Car Park and John Gray Autos were seriously littered.“

“Another strong performance by Cork City with almost half the sites surveyed getting the top litter grade, a large number just moderately littered and just a couple of poor sites.  Some examples of the very good top ranking sites included Riverwalk and Lee Fields (a lovely riverside amenity which was excellent with regard to litter and presentation), Bishop Lucey Park (scoring very well compared to previous  surveys), UCC (exceptionally good in terms of presentation and maintenance) and  Grand Parade.  By far the most heavily littered site  was the Former Crow’s Nest Victoria Cross which was a litter blackspot – it wasn’t just littered but dumping had taken place.”

Cork Northside: “It is shocking that there was just one ‘clean’ site in the 25 surveyed, with several previously good areas having dropped in standard.  Re-useable plastic bags (Bag for Life) turned up at a number of sites, withno evidence of cleansing being undertaken during the surveys and many long lie littered sites showing no evidence of clearance or maintenance.  Banduff Road, Upper Fairhill, and Churchfield / Kilmore weren’t just casually littered but suffered from domestic dumping.  Also, there was evidence of dumping along Assumption Road and Glen Avenue.  Mayfield Industrial Estate and Sunvalley Park were by far the most heavily littered sites, both subject to dumping.”

“From a relatively low base a number of years ago, Mahon has seen an improvement, but suffers from a lack of litter-free sites.  The residential area of Mahon Drive – while not top ranking it was noticeably better than previously.   The top ranking sites were Skehard Road, City Gate Business Park and Mahon Point Recycle Facility – the latter was a particularly fresh and well maintained facility.  The most seriously littered sites were St. Michael’s Cemetery Car Park, the residential area of The Maples and Open Space off Ringmahon Road – the latter wasn’t just littered but had an abandoned car.”