Cork County Council has introduced a novel method of reducing litter from cigarette butts. In the East Cork Town of Cobh, “litter ballot bins” have been installed in Casement Square and Pearse Square. Each of the distinctive metal yellow coloured bins has a changeable question on the front. Smokers can “vote” for their preferred answer by placing a cigarette butt into the relevant slot, encouraging members of the public to dispose of the cigarette butt in the bin, rather than littering on the ground. 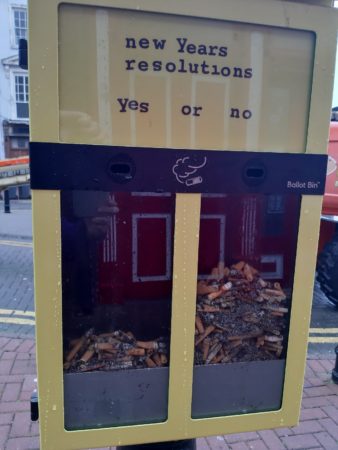 Installed in recent months, the bins were initiated by Cork County Council’s Municipal District Litter Warden Clodagh Meade and it is expected the bins will dramatically reduce littering in the town. The same style of bin has proven successful in reducing cigarette butt litter by 46% in other locations.

While smoking is harmful to health, it is also harmful to the environment in terms of litter. According to the 2018 National Litter Pollution Monitoring System Report, cigarette related waste made up 54.4% of all litter. Cigarette butts are the most common form of litter in the world and are also the greatest source of plastic pollution and marine litter, ranking even higher than plastic bags and straws.

Mayor of the County of Cork Cllr. Christopher O’Sullivan said “Individually cigarette butts are small in size but collectively they make up a large proportion of littering on our streets in many towns and villages. These new bins will promote a change of behavior and ultimately a reduction in littering. Cobh town received a 5th consecutive Tidy Town Gold Medal last year. It is a town of great heritage. Its deep water quay welcomes an increasing number of cruise ships each year. For these tourists Cobh is their first sight of Cork and indeed Ireland, so there is an added incentive for Cobh to be as litter free as possible.”

Chief Executive of Cork County Council Tim Lucey said “Cork County Council is strongly committed to supporting the constant improvement of our towns and villages; an important part of this is reducing the amount of litter on our streets and countryside. Anything that changes behaviours and encourages the use of bins is to be welcomed.”

News from Carrigaline
Previous Post
Bishop Lucey Park is being redeveloped, and the Royal Institute of Architects are seeking the best proposals