POST NO BILLS: Did you know that illegal signage is considered to be a form of litter? 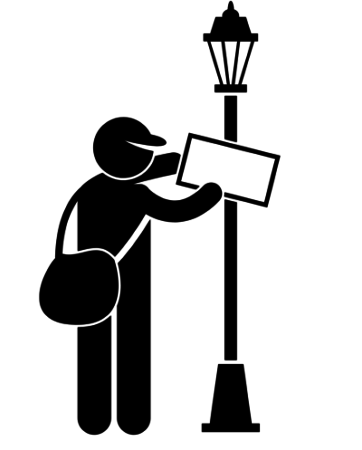 With effect from 1st February 2020, Cork City Council Litter Warden Service will be targetting illegal signage across the entire city (including the extended boundary areas of Glanmire, Douglas, Blarney and Ballincollig).

Under Section 19 of the Litter Pollution Act 1997, a person who is not the owner, occupier or person in charge of any structure or other land (including doors, gates, windows, trees, poles or posts that are in or are visible from a public place) shall not exhibit or cause to be exhibited thereon any article or advertisement.

Michael Sheehan from the City Council’s Waste Enforcement and Cleansing Operations Unit said: “We would like to remind all individuals, businesses, political groups, estate agents, sporting clubs/associations and schools of the provisions of Section 19 of the Litter Pollution Act 1997 with regard to illegal postering. There has been a noticeable increase in the frequency and volume of illegal signage across the city. These signs detract from the amenity of the areas that they are erected in and often are erected in such a manner as to create a hazard for both vehicular traffic and for pedestrians.”

“Cork City Council’s postering protocol caters for the erection of temporary posters in a limited number of cases in a controlled manner having regard to public safety.”

Cork City Council has a postering protocol in respect of property it owns.

In order to avoid litter fines of €150 for each illegal sign, poster or article of advertisement, Cork City Council advises each sector of society mentioned above to remove any and all illegal posters or advertising signs that they may have erected.