IDA Ireland’s inaugural ‘Special Recognition Award’ recognising the contribution of our clients to Ireland was presented by An Taoiseach Leo Varadkar and IDA Ireland to Apple and accepted by its CEO Tim Cook, at a special ‘Looking to the Future’ event in the National Concert Hall this morning.

CEO of IDA Ireland Martin Shanahan said: “We are introducing this annual Special Recognition Award as we believe it is important that we celebrate the huge contribution our 1500+ FDI companies have made to Ireland. Foreign Direct Investment continues to be a substantive driver of the economy. Our client companies in Ireland have demonstrated longevity, resilience and continued commitment, creating jobs – the numbers directly employed in the multinational sector in Ireland is at an all time high of 245,096 (10% of the Irish labour force) – and delivering enormous benefits to the national and regional economies. In introducing this award, we are also recognising the achievement that is Ireland’s proven ability to be an enduring partner for businesses with international ambitions. It is also an opportunity to showcase internationally the level and sophistication of FDI in Ireland.

Apple has invested and reinvested in Cork over 40 years now – Apple’s Cork site is an example of what is possible when a great company finds an exceptional pool of talent. Apple and its CEO have demonstrated continued commitment to Ireland over that 40 years – making Apple a very deserving recipient of this inaugural award. Having established in Cork in 1980 as its first operation in Europe, with 60 employees, the company has grown to become the valued employer of some 6,000 people in quality jobs that it is today. Those 6,000 employees, including over 20 people who have been working at Apple for more than 35 years, are performing a wide variety of functions across Apple’s global operations, building skills and expertise and contributing to the company’s global success. The impact of Apple’s investment and innovation extends far behind its own campus to the hundreds of companies and merchants of all sizes, across the country who benefit from Apple’s presence in Ireland.”

This award is also an appreciation of the work that everyone at Apple in Ireland does in helping bring the most innovative products to customers and providing incredible support for customers around the world. It also recognises Apple’s commitment to Ireland and the schools and charities where so many of Apple’s team volunteer their time to benefit local communities.

An Taoiseach, Leo Varadkar said: “Only four years after it was founded, Apple opened a factory in Hollyhill in Cork, employing 60 people. Today Apple is Cork’s largest employer with 6,000 people of over 100 different nationalities and is a global operation.

During this period Ireland has become the tech capital of Europe. We succeeded by looking to the future, opening our country to trade and competition.

As a country we continue to look to the future. With Global Ireland 2025 we are doubling our footprint across the globe, opening new embassies and consulates, expanding some of the ones we currently have, and investing in agencies like IDA Ireland, so we can attract investment from outside our traditional target markets. We are particularly focused on attracting investment to locations outside of Dublin.

This inaugural award recognises the contribution Apple has made to Ireland over the past 40 years, and it reminds us of all that can be achieved.” 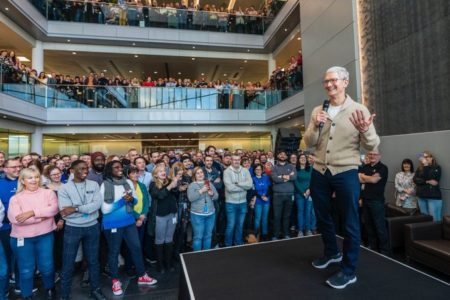 Tim Cook, Apple’s CEO said: “Ireland has been a second home for Apple for forty years and this honour is even more special for us because it recognizes the contributions of our incredible team here who work tirelessly to serve our customers around the country, and around the world.  I believe deeply that our most important work together is still ahead of us, and I’m grateful to the people of Ireland for their commitment to openness, to innovation and to the cooperation that will make possible the next generation of world-changing ideas.”

Celebrating 40 years of Apple in Ireland with our remarkable and growing team at Hollyhill! Your hard work and dedication to our customers and the communities we serve reflects the best of what we stand for. Here’s to the next 40! ?? pic.twitter.com/ADiRz3yoOP

An Taoiseach addressed the 1000-strong audience of invited guests drawn from IDA client companies, key stakeholders, business people as well as some Apple and IDA Ireland employees and presented the award to Tim Cook alongside Martin Shanahan and IDA Chairman Frank Ryan. This was followed by a keynote address from the Apple CEO and a conversation with Tim Cook and Martin Shanahan.

IDA said that the event would showcase internationally Ireland as a location for FDI and focus on the excellent Irish Tech talent that is available.