Irish Water last week completed the installation of the first of two sewer pipes extending for over 1km under the Estuary between Cobh and Monkstown – the longest such directional drill in Ireland. This was a significant engineering feat that involved feeding 1.3km of pipe along Laurel Hill and the Glen Road to the point where the pipe goes underground near Monkstown playground and under the Estuary to Cobh. We would like to thank the local community for their patience and support as we carried out this unique operation

The completion of the Cobh to Monkstown Estuary Crossing is a key enabler to ending the raw discharge of sewage from Cobh town. When works in Cobh are complete in 2021, the raw sewage from Cobh town will be collected and transferred for treatment via the Cobh to Monkstown Estuary Crossing to Monkstown pumping station, from where it will be pumped to Shanbally Wastewater Treatment Plant for treatment before its safe discharge to the harbour.

Déaglán Healy, Project Manager for Cork Lower Harbour Main Drainage Project, said: “I’d like to thank the local community for their patience with the works to date and particularly for their cooperation this week during the operation to pull the pipe into place into the bore under the estuary.  The first drill was completed last weekend between Cobh and Monkstown, the longest horizontal directional drill in Ireland.  Then, in a huge effort over 24 hours, O’Connor Utilities, our Contractor for the works, in partnership with Long O’Donnell, Nicholas O’Dwyer and our own Major Projects team, brought pipe along the Laurel Hill site and pulled it into place under the estuary.  At one point during the pulling operation – the pipe stretched over 1.3 kilometres along the road between the Laurel Hill site and Monkstown Park, the starting point of the bore under the estuary, before being pulled into place under the estuary. This success is thanks to the collaboration of the contractor, the local residents and the broader project team – and most importantly – it was all done safely.”

The Cobh to Monkstown Estuary Crossing Contract involves the drilling of two bores under the Lee Estuary by horizontal directional drilling and installation of a 500mm sewer pipe in each of those drilled bores.

Work is progressing well on the Cobh Networks, with approximately two kilometres of the total seven kilometres of sewer pipes laid to date as well as work started on the construction of two of the five pumping stations. 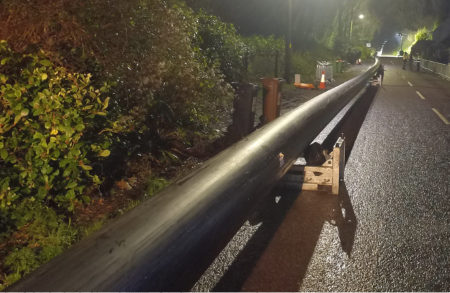 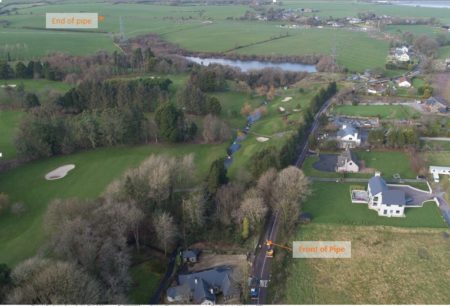 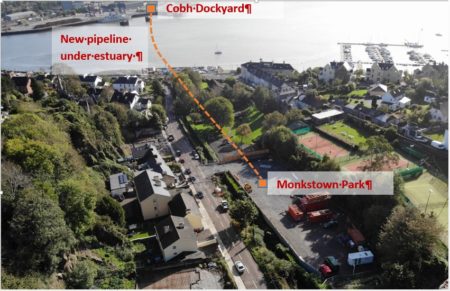 Information on all these works is available from our project team at Corklowerharbour@water.ie and on our website at www.water.ie/corklowerharbour.

When construction on the Cork Lower Harbour Main Drainage Project commenced in 2015, the equivalent of 40,000 wheelie bins of raw sewage was discharging into the Harbour every day. We are now treating the equivalent of 30,000 of those 40,000 wheelie bins by completing the Shanbally Wastewater Treatment Plant and pipelines and pumping stations on the south side of the harbour so that wastewater from Ringaskiddy, Crosshaven, Carrigaline, Passage West and Monkstown is now being treated.

When all the Cork Lower Harbour Main Drainage works are complete in 2021, the project will, in compliance with the Urban Waste Water Treatment Directive, treat all wastewater from the agglomerations of:

This means 20,000 homes and businesses will be connected to the new scheme and that raw sewage from these areas will no longer be discharged into the harbour, positively impacting the local economy and greatly improving the amenity value of the Cork Lower Harbour for the surrounding communities.