Irish coffee is a cocktail consisting of hot coffee, Irish whiskey, and sugar, stirred, and topped with cream. The coffee is drunk through the cream. (Yes it is a cocktail even though the word cocktail is not used in Ireland for it.)

Several places claim to have developed the modern recipe in the 1950s. One version is attributed to a Joe Sheridan, head chef at the restaurant and coffee shop in the Foynes Airbase Flying boat terminal building, County Limerick. In 1942 or 1943 he added whiskey to the coffee of some disembarking passengers.

It is also told that the original maker of the now infamous Irish coffee was invented by Joseph Jackson, of Jackson’s hotel Ballybofey county Donegal, who whilst fighting in World War II made the drink in an effort to keep his fellow comrades awake through the night under attack from German soldiers. Following the war he brought the drink that he invented back to Donegal, making the first Irish Coffee.

Regardless of the history one thing is sure; it smells nice (combing the aromas of Irish Whiskey and Coffee) and it looks amazing. Clonakilty Distillery in beautiful West Cork have sent us the following photograph of their product. 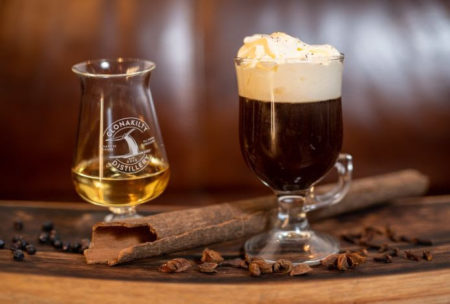