Cork barman sets world record for ‘Most Irish Coffees made in 3 minutes.

A new Guinness World Record made history today in the Old Storehouse Temple Bar as four bartenders went head to head for the title to make the most Irish Coffees in three minutes.

On Saturday, January 25th, as people across the world celebrated International Irish Coffee Day, the first Guinness World Record attempt took place in Dublin for the most Irish coffees made in three minutes. Paddy Courtney, Comedian and Actor, recently known for his role in Channel 4’s Brassic, Safe and A Bump Along The Way hosted the event. The event celebrated the great and original Irish cocktail, Paddy Irish coffee, with a full house of members of the public in attendance to cheer on the historic event.

Rory McGee, The Shelbourne, Cork said “I’m so proud to have won a Guinness World Record, everybody loves an Irish Coffee and what better way to celebrate it than to make history with it.“

George Roberts, Country Manager with Hi Spirits Ireland said “The Irish Coffee is renowned around the world but it might be the most underutilised cocktail in Ireland. It is a drink of which we as Irish people can be proud. If you go into any bar or restaurant worldwide and ask for an Irish Coffee, chances are you will get some form of mixture of Coffee, Irish Whiskey, & Cream.

We are now trying to take this a step further and say that if you go into any bar in Ireland and ask for an Irish Coffee, you will get a perfectly served Paddy Irish Coffee.” 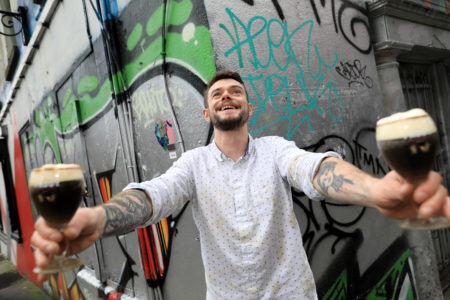 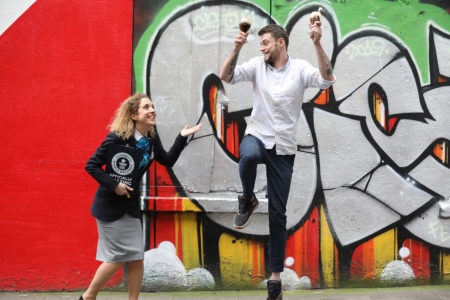 Overall winner Rory Mc Gee from The Shelbourne in Cork pictured with Guinness World Record’s Anna Orford on International Coffee Day in the Old Storehouse Temple Bar where a Guinness World Record attempt was made in Dublin for the most Irish coffees prepared in under three minutes.The challenge was hosted by the Old Storehouse in Temple Bar in association with Paddy Irish Whiskey and saw five bartenders go head to head for the record. 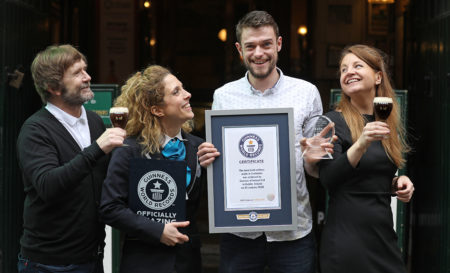 Previously, Irish Coffees have been used for a number of world records such as the World’s Largest Irish Coffee which stands at an outstanding 234-gallons, and for the most Irish Coffees sold in a day which was 2,223 in San Francisco, but this was the first attempt at creating Irish Coffees in a specific time limit.