Pool Draw: Irish Host Team Sunday’s Well Rebels will kick off the Tournament with a game against Mara xv Argentina 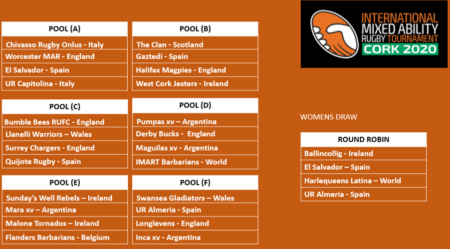 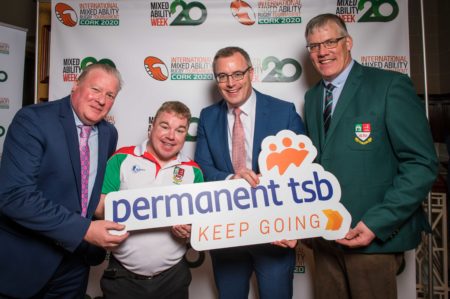 Permanent TSB were also announced as headline sponsors of IMART 2020, which will take place in Cork from the 7th -12th of June.

This year’s tournament will see 28 teams from 14 countries, 1,000 players and, for the first time, four women’s teams compete for the Women’s Winners’ Cup and Women’s Spirit of Mixed Ability Rugby Cup.

“Today is a big day, in a succession of big steps we’ve taken since we first decided we would put everything we have into bringing IMART 2020 to Ireland. With just four months to go before thousands descend on Cork for this momentous sporting occasion, we are really hitting the ground running behind the scenes in terms of preparation. The support people have shown to date has been truly fantastic. We are indebted to everyone who has helped us reach this point. We are delighted that Permanent TSB have come on board as headline sponsor, and we are hugely grateful for their backing. Bring on IMART Ireland 2020!”

Catherine Doyle of Permanent TSB spoke of their support for “a game that promotes unity and equality”,

“I am proud to be here today on behalf of Permanent TSB. Upon hearing of the tournament, we immediately knew we wanted to get involved in whatever way we could. The relentless work that has gone into not only bringing the tournament to, but promoting the game itself in Ireland, is something to be applauded and admired. I have no doubt that the drive and determination of all involved will ensure an event that would be hard to rival anywhere else in the world”.

The men’s tournament draw will consist of 6 pools of 4 teams, with the winners in each pool, plus the next 2 highest scoring teams progressing to the Quarter Finals. Points are scored through pools match results and through the “Spirit Of” scoring system.

The remaining men’s teams will play out for placements, with all teams having equal opportunities to score points for the ‘Spirit of Mixed Ability Rugby Trophy’.

The inaugural women’s Mixed Ability Rugby World Cup will be run as a round robin and culminate in a final and a runners-up competition. Points are scored through pools match results and through the “Spirit Of” scoring system.