Relatives of Mac Curtain and McSwiney to be the Grand Marshals at the Cork City St. Patrick’s Day Parade 2020

Descendants of Tomás MacCurtain and Terence McSwiney families to be the Grand Marshal at the Cork St. Patrick’s Day Parade

The Cork St Patricks’ Day Parade will take place at 1pm on Tuesday March 17th and the theme of the Parade is “A City Rising 1920-2020”. To reflect their ancestor’s importance in 1920, the descendants of the Tomás MacCurtain and Terence McSwiney families will make up the Grand Marshal group.

The Parade which will begin at 1pm will be a hive of activity and colour. Feed your imagination as Street Art company, Spraoi, celebrate Cork’s proximity to the sea and our port, bringing Lir to travel along our streets, accompanied by creatures from the deep. Cork Puppetry Company will breathe life into Morrigan, the goddess of war, along with the ancient Formorians who will rise to defend the City from the Burning of Cork. And Cork Community Art Link will bring the magic of the silver screen to life as they celebrate the 100th anniversary of Blackpool’s Lido Cinema. 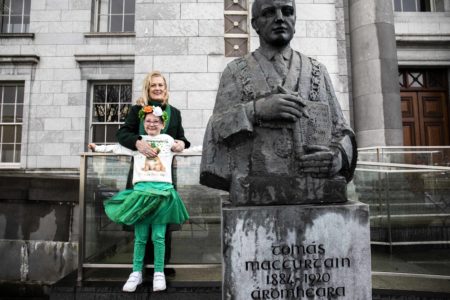 A giant film set will move through the streets and recreate the golden age of cinema, complete with director, make-up artists, technicians and camera crew. In 1920, the burning of Cork destroyed 5 acres of our beautiful city, but Buí Bolg will remind us of the great rising of Cork from those ashes. From the stonework depicting the strong foundations of Cork, flowers will bloom – highlighting the resilience of this great city.

The Cork St. Patrick’s Festival runs from 13-17 March across the city, full details are available on www.corkstpatricksfestival.ie. The festival culminates in the incredible Parade on St. Patrick’s Day (Tuesday March 17th) which over 40,000 people will attend. The parade begins at 1pm on St Patrick’s Day and will be streamed live on www.corkcity.ie/en/tv If you would like to send a message to the live stream – a greeting from near or far to be read out on air – please email parade@corkcity.ie