If you want to organise a 1920 Commeneration event, then Cork County Council might have a grant for you

Cork County Council, in recognition of the importance of the War of Independence and Civil War and acknowledging the enthusiasm that exists within the County to commemorate the centenary of this defining period of Irish history, has announced the opening of the County Cork Commemorations Grant Scheme 2020. 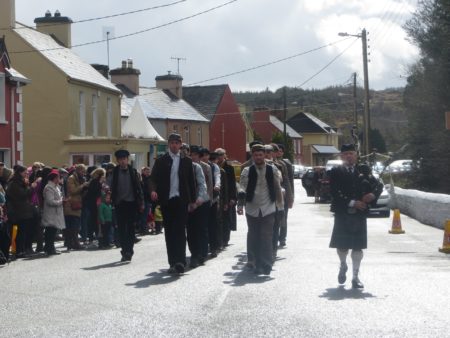 The War of Independence and Civil War saw the engagement of hundreds of young men from around the County of Cork. Pictured is a re-enactment of Volunteers in Inchigeelagh.

The County of Cork played a most pivotal role in this four year period of Irish history that in the county alone saw the loss of over 500 lives. Many of the events spanning the period of 1920 to 1923 have great local significance, several having national and even international significance.

In County Cork during 1920 there were close to 100 significant War of Independence incidents including close to 20 ambushes alone, resulting in over 50 fatalities.  That year in history and this year in centenary commemoration, Tomás Mac Curtáin from Mourneabbey in North Cork was assassinated and his successor, Terence McSwiney who had been a T.D. for mid County Cork in the First Dáil, died after 74 days on hunger strike.  1920 in County Cork saw the most significant Kilmichael Ambush, which resulted in 20 fatalities; the taking of the Military Barracks in Mallow and the official name change from Queenstown to Cobh in July 1920, to name but a few occurrences.

Speaking of the grant scheme, the Mayor of the County of Cork Cllr. Ian Doyle noted

‘Cork County Council has already been approached by numerous community organisations throughout the county, looking to undertake commemorative centenary events and initiatives in their locality. This fund will allow the Commemorative Programme for County Cork to do justice to the past and provide the support for those community groups, who today, seek to remember these important historical events. Cork County Council recognises the commitment of local communities in honouring the past and as Mayor of the County of Cork, I encourage communities to consider applying to the fund’.

‘The purpose of this fund is to support local groups, organisations and individuals who wish to commemorate significant events, through a variety of initiatives such as ceremonial events, school projects, documentaries, exhibitions and the arts. In 2016, Cork County Council provided support to over 160 different groups and organisations from throughout the County, resulting in the largest 1916 Commemorative Programme in the country with over 500 events.  It is clear that the County of Cork prides itself in remembering the past and the people who made us who we are today.’

A timeline of centenary events in the County of Cork is available on www.corkcoco.ie/arts-heritage in the upcoming events page of the Heritage section. For further information email commemorations@corkcoco.ie or phone 021 4276891