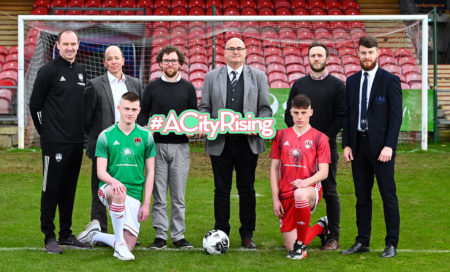 Cork City FC and Cork Credit Unions are delighted to announce a new three-year extension to their partnership that will see the latter sponsor City’s academy teams for the 2020, 2021 and 2022 seasons.

The partnership will see the Cork Credit Unions logo proudly displayed on the jerseys of the club’s academy teams, both girls and boys.

Cork Credit Unions have come together to forge stronger relationships with Cork focused initiatives. This cooperation between Credit Unions is a key ethos by which they operate, helping them to provide award-winning service. Credit Unions are not-for-profit, always keeping the members’ interests at the forefront of everything they do. As co-operatives, they share the same ethos as the team members of Cork City FC, helping to make this partnership such a great fit.

Cork City’s boy’s academy, headed by former City and Republic of Ireland star, Colin Healy, comprises the club’s Under 13, Under 15, Under 17 and Under 19 team and the Women’s National League Under 17 side, coached by Sarah Healy.

Speaking at the launch of the partnership, Colin Healy welcomed news of the extension, saying: “We are very proud to be a community club that is working with local clubs and local players to give kids in Cork, and further afield, the opportunity to progress into the professional game. The support given by Cork Credit Unions will be a significant boost to our Academy, as we look to build on the success we have had over the last number of years. Having the backing and support of Cork Credit Unions for a further three years is great news for everyone involved in the academy.”

Paul Deasy, Commercial and Marketing Manager of Cork City Football Club commented: “We are delighted that Cork Credit Unions have continued for another three years. It is a sponsorship that ties in wonderfully with what we are about as a club in regards to working in the community with families and being accessible to everyone from all parts of Cork. We worked closely with the group in the second half of 2019 where the partnership prospered, a three-year commitment from them shows a real statement of intent for their support of both the academy and the club as a whole which is fantastic to see.”

Spokesperson for Cork Credit Unions Luke Casey had the following to say: “We are delighted to be involved with the club at grassroots level and helping academy players to develop their talents and play for City. As financial co-operatives, we pride ourselves on supporting local and our fellow co-operative in Cork City FC. We’d like to take the opportunity to wish the club all the best for the season ahead!”