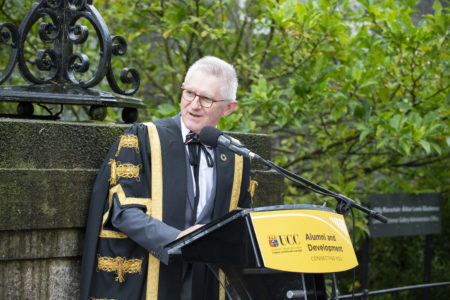 UCC researchers show that increased water temperatures and reduced food supply strongly affect where trout decide to live – with more trout opting to stay in rivers as things heat up. This could seriously decrease the sea trout population as the climate continues to change.

Little is known about why some fish migrate to sea and others do not – some brown trout make the decision to leave the river where they are born and head to the sea in search of more food, or mates, or to get away from unpleasant river conditions – conditions which will be made much worse by climate change.

Researchers from UCC asked the question of how changes in water temperature and the amount of available food (both affected by climate change) influence the migration of brown trout. By rearing young of wild trout for two years under conditions of reduced food and increased temperature, and then recording the numbers of future sea-going migrants, the team found that food reduction increased the numbers of migrating fish, but warm temperatures had the opposite effect, where fewer fish chose to migrate to sea, instead remaining resident in fresh water.

Lead author on the study (published this week in Global Change Biology) Louise Archer of the Environmental Research Institute in UCC, remarked, “Brown trout are iconic for their ability to undertake impressive migrations to sea, yet we still know little about why some fish choose to migrate, and why others remain resident in fresh water rivers and lakes. What makes a sea trout has been an ongoing source of interest for biologists.”

With conflicting pressures mounting, trout will become under increased pressure make complex decisions about whether they should migrate. The study noticed that fish choosing migration were smaller and in poorer condition than fish that remained in fresh water, indicating sea migration occurred when the fish urgently needed to consume more food. But how will they balance this with the urge to remain in the ever warmer rivers?

“Understanding how climate change will affect migratory “sea trout” is crucial to successful management and conservation of the species,”, notes Archer, “particularly since many sea trout populations have shown dramatic declines across Europe in recent years. Our study sheds some light on this enduring question by highlighting how warming temperatures cause fewer fish to migrate to sea, with more fish remaining in fresh water to reproduce earlier. Worryingly, our research suggests that with climate warming, we may see further declines in sea-going trout.”

How to volunteer to help with Covid 19?
Previous Post
How UCC is forging strong research links with Wales