The Ombudsman – Peter Tyndall – has published his annual report, which always makes for an interesting read

Dissatisfaction about housing saw complaints about local authorities across the country rise by 12.6% between 2018 and 2019. Complaints about the education sector, which includes bodies providing student grants and education grants for people with disabilities, increased by 17% in 2019.

The Ombudsman continues to see significant numbers of complaints being made to his Office since the start of the COVID-19 pandemic. There has been a sharp increase in complaints involving the Department of Employment Affairs and Social Protection. This was largely due to the significant increase in the number of people now interacting with the Department. A number of complaints related to the COVID-19 payment (Pandemic Unemployment Payment). In one case, a man who was eligible for the payment was stranded in Poland and was refused payment when he applied online. The Ombudsman resolved the case within 24 hours and he received his payment. 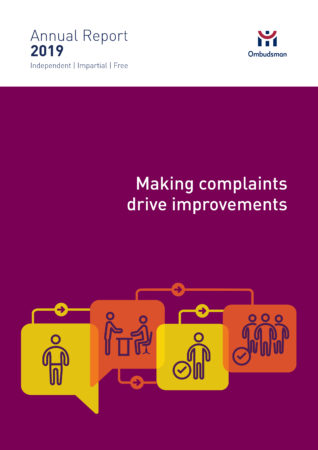 In his annual report, the Ombudsman highlights the long delay in replacing the Mobility Allowance and Motorised Transport Grant schemes. The Department of Health schemes have been closed to new applicants since 2013. There have been numerous promises to introduce new legislation but without any progress.

The Ombudsman also criticised the lack of action in reforming the eligibility criteria for the Disabled Drivers and Disabled Passengers scheme. The Ombudsman said that the way the criteria are framed results in people being denied admission to the scheme who are equally (but differently) disabled from a mobility point of view to those who have been admitted to it.

The Ombudsman’s annual report for 2019 is available at www.ombudsman.ie

The Ombudsman’s annual report also summarises some of the complaints he upheld in 2019 including:

A woman attending Letterkenny University Hospital complained to the Ombudsman after a doctor discussed her medical history with her but she realised it was not hers. The woman was at the hospital preparing for a surgical procedure when she also discovered a letter on her file belonging to a different patient. The woman cancelled the procedure and complained to the hospital. It also emerged that a ‘General Incident’ form had not been completed after the incident. The hospital apologised to the woman. It also reviewed its policies and delivered extra training to staff to ensure the incident did not happen again.

A woman complained to the Ombudsman when the Civil Registration Service (CRS) said it would not record the woman’s home as her daughter’s ‘place of birth’. The woman had a planned home birth but there was no midwife or other medical professional present. The local hospital recorded the birth as a ‘birth before arrival’ and so the Civil Registration Service used the same category. It emerged that HSE categorisation guidelines do not provide for a situation for a ‘birth at home’ if there is no midwife present.

The Ombudsman raised the issue with the CRS, which immediately apologised to the woman. The CRS changed the child’s place of birth on her birth certificate to ‘birth at home’. It also changed its procedures and reimbursed expenses incurred by the woman in pursuing the case.

A man complained to the Ombudsman when Mayo County Council significantly reduced his home repair grant after telling him he would get the full amount. The man had applied for assistance under the Housing Aid for the Elderly Scheme (HAES) for essential repairs to his home. The Council initially said he would receive the full amount of €8,000, but reduced it to €3,275 after discovering he received a grant three years earlier in 2014.

In April 2015 – a year after the man received the initial amount – the Council took a policy decision to reduce the amount of a grant if the applicant had received a previous grant under the scheme. However, the legislation governing the scheme did not allow the Council to make such a decision. In addition, the Council’s application form did not indicate that the grant could be reduced.

The Ombudsman highlighted the case to the Council and the Department of Housing, Planning and Local Government. The Council changed its decision and gave the man the full amount. It also changed its procedures to ensure the situation would not happen again.

The Ombudsman believed the Council was acting unfairly as the builder had lodged the bonds in 2001 and 2002 – several years before the Council changed its policy. The Council agreed to pay the builder the interest of nearly €28,000.

The Ombudsman also asked the Council to identify any other similar cases. The Council discovered 24 cases involving total interest of €68,000. The Department of Housing, Planning and Local Government subsequently contacted all local authorities to inform them that such a change in policy cannot have retrospective effect.

A woman complained to the Ombudsman after the Department of Employment Affairs and Social Protection refused her late application for the Back to Education Allowance (BTEA). However, the woman said that delays by the Department meant she could not complete the application in time.

In order to be eligible for a BTEA you need to be in receipt of one of a number of social welfare payments. The woman had applied for Carer’s Allowance in December 2016 but the Department did not approve her application until February 2019. The Department refused her subsequent application for BTEA.

The Ombudsman pointed to the delay of over two years in the Department resolving the woman’s Carer’s Allowance application. The Department agreed to revise its decision and awarded the BTEA to the woman with arrears of €19,770.