Patricia (Pat) McCluskey has been named as Cork Person of the Month for May to honour her work as an Advanced Nurse Practitioner in Wound Care at Cork University Hospital and her work with the charity Facing Africa. 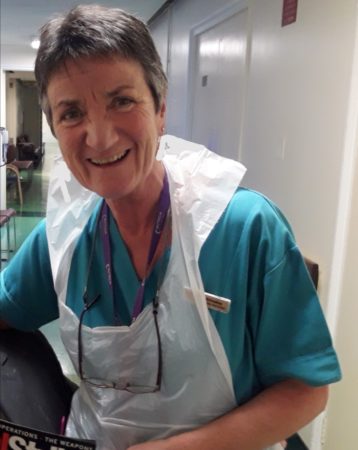 Advanced Nurse Practitioner in wound care Pat McCluskey, is the May 2020 ‘Cork Person of the Month’

Pat has worked as a wound care nurse for more than 30 years, and is currently working as part of the team at Cork University Hospital helping Coronavirus patients.

In 2015, Pat became involved with the charity ‘Facing Africa’ (FA). FA was founded in 1998 by Chris and Terry Lawrence to help with the treatment of people suffering from Noma infection. Noma usually affects people living in extreme poverty and is an opportunistic infection that leads to a severe disfiguring gangrene of the mouth and face. Noma begins as a gingival ulcer in childhood and rapidly spreads through muscle and bone. If the condition is detected in the early stages, progression can be prevented with the use of antibiotics and immediate nutritional rehabilitation.

Having spent two years in Zambia as a newly qualified nurse/midwife from 1983 – 1985, Pat had always hoped to return to Africa at some point in her career, once she had gained more experience. In May 2015, Pat travelled with a group to Addis Ababa, Ethiopia. This included a team of four from CUH; two anaesthetists, Dr Patrick Seigne and Dr Peter Lee, a nursing colleague Ann Higgins, and a team from the UK made up of four plastic surgeons, two anaesthetists and four ward nurses. This group was led by FA founders Chris and Terry Lawrence. For the last four years, Pat has returned to Africa on the May mission. In more recent May missions other CUH volunteers, Dr Dan O’ Mullane (anaesthetist) and Sheila Lordan (ward nurse), Catherine Kingston and Eileen Foley (theatre nurses) have joined the team.

Usually teams of sixteen people, led by Chris and Terry, travel for two weeks to the Facing Africa house in Menagesha. Here, patients are assessed and admitted, with surgery performed at the NCM hospital in Addis Ababa, in which FA rent a surgical theatre and ward for their two week stint. The surgeries are often staged, meaning initial surgery is followed up at the next mission, and reconstruction may take many surgeries to complete treatment. As well as Noma, some life threatening tumours, usually of the head and neck, are also operated on when possible.

As Pat’s specific area of expertise is wound care, she spends some months prior to travelling preparing wound care education resources and procuring products that would be of use. The role of nurses on the mission is in pre, intra and post-operative management, and essential wound care management. The training that the teams have provided on the missions has enabled Ethiopian nurses to gain sufficient experience, reducing the number of volunteer nurses required to two ward nurses on future missions. One of the nurses from Ethiopia, Tihitna Tafete, who has worked for the FA mission in Addis, has been in Ireland completing a Master’s in Public Health which was facilitated by CUH and UCC. She will complete her programme this year and return with better skills to support her patients and healthcare professionals in Ethiopia.

More recently Pat has faced new challenges during the Covid-19 epidemic, in the area of pressure damage to the skin for patients who are ventilated. As Pat noted, “Patients are nursed in the prone position, which is very rare. These are very problematic wounds; a side effect of the illness which is well documented from China and elsewhere.” Pat’s job has been to treat and minimise further discomfort to people hospitalised due to the disease and to support her nursing colleagues in their management.

Speaking of her work, Pat McCluskey said, “I am delighted to have received this award. The work I do is not for recognition. It is not a hardship and I have loved my nursing career. There is fun and laughter throughout the two weeks each year. Chris and Terry are extraordinary people; both now in their 70’s. They run a superb operation and look after the team so well. The Ethiopian people are really warm, welcoming and fun-loving. I am proud to be a nurse in CUH during this current epidemic where the management and team work across all disciplines has been inspirational.”

Awards organiser Manus O’Callaghan said, “Pat McCluskey is an Advanced Nurse Practitioner, with a big reputation amongst the medical community in Cork, Ireland and Internationally, in wound care management. She also lectures on the subject at many national and international conferences. No one, of course, appreciates her work more than the thousands of people she has treated in Cork and Africa over the years. She selflessly devotes her time to improving people’s quality of life, and helps to alleviate their suffering. We thank her for her bravery during the Covid-19 pandemic, and her ongoing commitment to the Facing Africa mission.”

Pat McCluskey, who was nominated for this award by Ex-TD Kathleen Lynch, will now go forward for possible selection as Cork Person of the Year at an awards lunch on January 15th at Rochestown Park Hotel. Sponsors of the awards scheme are the Irish Examiner/The Echo; RTE; Southern; Lexus Cork; AM O’Sullivan PR; Cork Crystal; Tony O’Connell Photography; CAVS; Musgrave MarketPlace.

POLITICS: Is Fianna Fail leader putting PERSONAL AMBITION ahead of what members want?
Previous Post
How to Spot Potential Plumbing Issues When Inspecting a Home
Next Post
Tweets by @TheCork_ie