€10,000 is on offer to an Irish artist (well, they must be in Co Cork!) to create “a visual representation of the incredible efforts of the citizens of Cork” during the difficult times of COVID19

The Mayor of the County of Cork, Cllr Ian Doyle (FF), has experienced a unique term in office. Taking on the role when his predecessor, former Mayor Christopher O’Sullivan (FF), was elected to Dáil Éireann, Mayor Doyle went on to represent the people of Cork County in the exceptional circumstances of the COVID19 pandemic.

In lieu of the traditional Mayor’s Award Ceremony Mayor Doyle will, on behalf of the people of Cork, express gratitude, by presenting community groups, volunteers and first line responders, who have so admirably served the people of Cork County during this crisis, with a ceremonial scroll. The scrolls will be delivered to recipients, rather than at public ceremony, in order to adhere to public health guidelines.

As a further tribute to community spirit, Mayor Doyle announced a Call to Artists for a specially commissioned piece of artwork that will be a visual representation of the incredible efforts of the citizens of Cork during this time. The Mayor has a long-standing history of community activism and has met with a wide variety of community, voluntary and statutory agencies who have been to the very fore in terms of the Covid-19 response. During his term, Mayor Doyle has witnessed at first-hand the tremendous effort that has been made by individuals and community organisations alike and he now wishes to acknowledge this work through this commission.

“This call for a specially commissioned piece of artwork goes out to all artists based in County Cork. I would like to positively support the Arts in County Cork at this difficult time and recognise how Covid 19 has demonstrated the strength which exists across our communities. This art work can visually represent a particular moment in time when the people of Cork County, although physically apart, ultimately came together in the spirit of collaboration and cooperation. I am especially proud to have witnessed this first-hand in my term as Mayor and would like to acknowledge this as I come to the end of what has been an extraordinary tenure.” 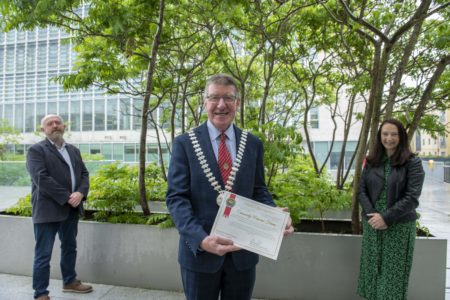 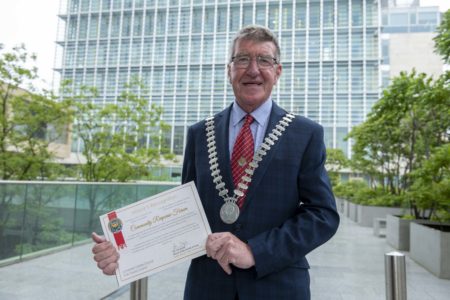 Cllr. Ian Doyle, Mayor of the County of Cork with a scroll which will be presented by Cork Co. Co. in lieu of the traditional Mayor’s Award Ceremony.
Pic: Brian Lougheed

The Commission is open to artists living based in County Cork and is valued at €10,000. The selected commission will be located at the Library in the Mayor’s hometown of Charleville, North County Cork.

Interested artists are invited to submit their proposals via www.YourCouncil.ie where full terms and conditions can also be found.