Network Ireland West Cork President Caroline Murphy and Vice President Katherine O’Sullivan are celebrating the branches success with two National Awards in the first two years since this branch was formed. This West Cork branch has gone from strength to strength, becoming the fastest-growing branch Nationally in 2019 and can boast of 2 National Business Woman of the Year Award Winners, which is an incredible achievement for such a newly formed group. 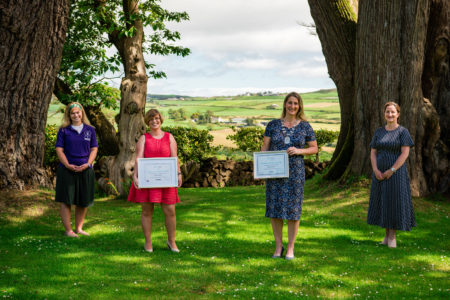 Caroline Murphy was the first West Cork member to win a National Award in September 2018 in the ‘Emerging New Business’ category for her company West Cork Eggs. Katherine O’ Sullivan, General Manager of O’ Donnell Furniture won the 2019 Employee Shining Star award at the Network Ireland awards ceremony held at Celtic Ross Hotel, Rosscarbery last September. The West Cork branch are hoping to make 2020 the year of 3 in a row.

Awards sponsors, AIB have been the official national partner of Network Ireland since 2013 and continue this longstanding partnership with an organisation dedicated to supporting and empowering women to succeed in their business and personal lives. The categories of the 2020 awards are designed to reflect the vastly altered working world in which we all find ourselves in. 2020 has become a time for reflection, drawing on the power within ourselves to transform and create a new way forward. The new categories are : Business Innovation, Emerging Business, Solo Businesswoman and The Power Within Champion. The award for the Power Within Champion is designed to recognise survival and the strength it takes to survive in business in this challenging year.

Judging takes place in the coming weeks and branch winners will be announced on Thursday 27th August 2020 at an awards ceremony which will be held at Dunmore House Hotel. Proceeds from this event will go to branch president Caroline’s chosen charity, which is Féileacáin, a not for profit organisation providing support to families affected by the death of a baby.

The awards will be hosted by Margaret Nelson, CEO of FM104 and Q102. Margaret is a beacon of inspiration for women with a career in radio that spans nearly thirty years. Since taking over Q102 in 2018 it has moved from the fifth radio station in the Dublin market to a very impressive number two – under her guideship she has brought both stations to number one and two position in the very competitive Dublin radio market. Margaret says “Well I’m beyond thrilled to be involved in the awards this year for Network Ireland. West Cork is an unique and special place as we all know well – I came down from Dublin in early march for a week to lock up a house with my husband and two kids (18 and 22) and 5 months later we are still here! I can’t tell you how much people and networking means to us all and the recent pandemic has proven that it is fundamental to the very core of all business and how successful we are. People do business with people there is no denying that so no matter how far technology has evolved over the years it will never replace the fact that human interaction is what matters so roll on awards like this and well done to everybody involved – such a great committee and a superb, great community of business ladies in West Cork.”

Each regional category winner will go forward for the national interviews held in September and will represent the West Cork branch at the national awards which will be held in October. Speaking ahead of the Awards Ceremony, President, Caroline Murphy said “The Business Women Awards are the highlight of the Network Ireland year. They celebrate the variety, quality and achievements of our members and in 2020 we need the positivity and even though it has been, and continues to be, a tough time for many, there is so much to celebrate. As an organisation and membership we have pivoted, diversified, struggled, taken care of, home schooled, worked from home and achieved so many different things that now is the time to celebrate all that. Well done to everyone who entered and I certainly don’t envy the judges job and I am so looking forward to the Awards event at the end of August”