Baltimore RNLI were called out to provide a medical evacuation earlier this afternoon (Friday 14 August) from Sherkin Island off the coast of Baltimore, West Cork.

The volunteer lifeboat crew launched their all-weather lifeboat at 2.41pm, following a request from the Irish Coast Guard to provide medical assistance and evacuation to an islander. 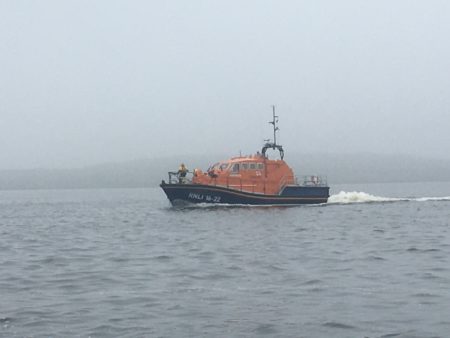 The Baltimore all-weather lifeboat crew arrived at Sherkin Island a few minutes after launching and went to the location of the casualty. After an initial assessment the voluntary lifeboat crew brought the casualty back to the pier and onboard the lifeboat.

The lifeboat then returned to the station in Baltimore at 3.29pm where the casualty was handed over to the care of the HSE ambulance crew.

There were seven volunteer crew onboard the lifeboat, Coxswain Kieran Cotter, Mechanic Sean McCarthy and crew members Aidan Bushe, Jim Griffiths, Jim Baker, Kieran Collins and David Ryan. Conditions at sea during the call out were foggy yet calm with a east south easterly force 2 wind and no sea swell.

Speaking following the call out, Kate Callanan, Baltimore RNLI Volunteer Lifeboat Press Officer said: ‘This is the second call out to a medical evacuation on Sherkin Island for Baltimore lifeboat this week. If you find yourself in need of medical assistance whilst on an island, call 999 or 112.’