Cork City’s One City One Book was launched by Deputy Lord Mayor Cllr Kieran McCarthy in Cork City Library recently A discussion on the book with author Tadhg Coakley was led by poet and writer Thomas McCarthy, behind closed doors.

The 2020 title is Whatever it Takes by local writer Tadhg Coakley. Cork city is central to the crime novel and its characters, and several of its key moments take place in well-known city centre street locations. The wonderfully constructed plot will have the reader gripped from the first page to the last. His love of the GAA adds an unusual dimension to a crime novel.

As part of One City One Book Tadhg will lead a short outdoor walking tour, on Friday September 4 at 6.00 pm from The City Library. He will perform readings at the exact locations where they take place in the book and explain the backgrounds to the locations chosen. This tour is almost booked out with just a few places remaining. Contact patricia_looney@corkcity.ie

The book is available in all Cork City Council Libraries (and in Waterstones Bookshop on Patrick’s Street who are partners) and is supported by Creative Ireland. 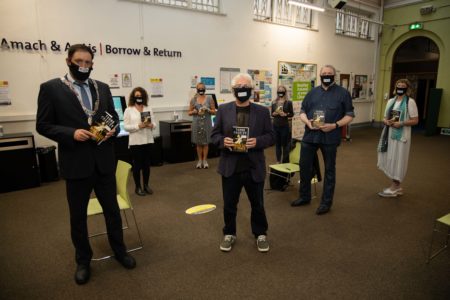