Mayor of the County of Cork, Cllr. Mary Linehan Foley joined Minister Patrick O’Donovan, Minister of State at the Office of Public Works (OPW) to meet with those affected by flooding in Bantry and Bandon this week.

A period of intense rain, which saw over 50mm fall in 24 hours in Bantry on Monday resulted in significant flooding and damage to properties and street surfaces in the town centre. An emergency structural assessment of the culvert was completed yesterday afternoon to allow repairs to the road surface before streets reopened to traffic. In Bandon, localised downpours over a short number of hours overwhelmed the drainage and sewer network, causing flooding and property damage at Brady’s Lane and Bridge Street. 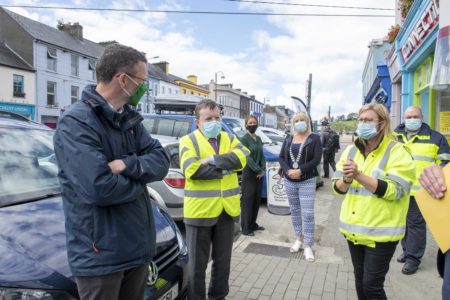 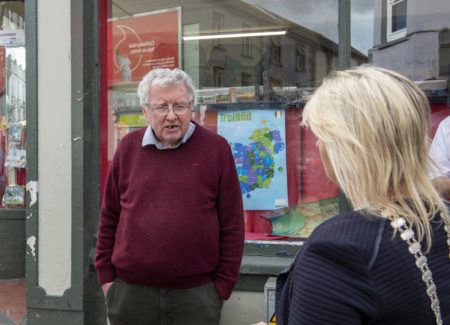 The Mayor of the County of Cork, Cllr. Mary Linehan Foley visited Bandon, Co. Cork after the flooding following Storm Francis. The mayor met with Eric Hickey of Hickey’s Newsagents on South Main Street. Hickeys have been newsagents in Bandon for over 100 years.
Pic: Brian Lougheed

“I have seen and heard firsthand the impact of the floods in Bantry and Bandon; it is an incredibly difficult time for the business owners and residents who have suffered such destruction. This year has already been extremely difficult for traders and local businesses and this is yet another challenge. The devastation caused by these severe weather events has hit communities hard at an already vulnerable time.”

“Cork County Council’s Fire Service and operations crews have remained on standby throughout, responding to alleviate flooding, ensuring routes were cleared; assisting homes and businesses with clean up operations and undertaking emergency repair works. Local people have been working through the night alongside our crews to ensure businesses could reopen as soon as possible. Homes and businesses in many parts of the County have suffered flooding in recent weeks but the resilience of these communities has been remarkable. I welcome Minister O’Donovan back to West Cork and I know that Cork County Council continue to work closely with the OPW and other stakeholders to review the damage and address concerns highlighted during recent events.”