“The idea that someone would spend €1,300 a month to live in a shoebox, beggars’ belief.” 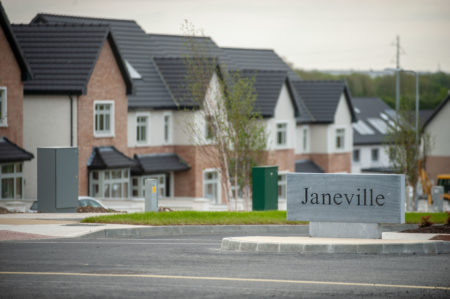 File photo of a fine new housing estate in Cork. The semi-D as here was popular in the 70s, 80s, 90’s. However the housing market is changing way from this. ‘co-living’ is now on the agenda.

“Every week, we hear of another co-living planning application, particularly in our large cities. It is more common in Dublin currently, but unless we deliver better housing solutions they may become more commonplace in Cork.

“At the latest count, there are almost 4,000 proposed co-living beds planned or in the planning process in Dublin and our other urban centres, which is in stark contrast to the number of planning applications for genuinely affordable homes for working people.

“Despite being a vocal opponent to co-living in opposition, the Fianna Fáil Housing Minister Darragh O’ Brien is conducting a review of co-living.

“It was not just the Housing Minister that was adamantly opposed. Micheál Martin, the current Taoiseach and Cork TD, referred to this kind of accommodation as “battery cage-type accommodation”.

“He asked whether we were going back to the era of tenements and I could not have agreed with him more.

“Our cities do not need glorified tenements for people. The idea that someone would spend €1,300 a month to live in a shoebox, beggars’ belief.

“By not immediately banning co-living Darragh O Brien is once again continuing with the failed Fine Gael Housing policy that he was so vehemently against a few short months ago.

“And while Fine Gael may be happy to refer to co-living as “boutique hotel living” the Green Party are on the record as referring to co-living as an “inhumane and profit-driven model” of accommodation.

“The Bill we will debate tomorrow seeks to do three things. It will scrap the controversial power for Ministers to make dramatic changes to planning law without a vote of the Oireachtas, ban co-living and ban substandard design of build-to-rent properties for renters.

“I hope the Bill will be supported by all parties and none and that we can finally ban this ridiculous type of accommodation.”