The West Cork based Clonakilty Distillery, has announced the appointment of a UK distributor.

Clonakilty Distillery, has partnered with drinks importer and distributor Mangrove UK, to launch its range of Irish whiskeys and gins in the UK. 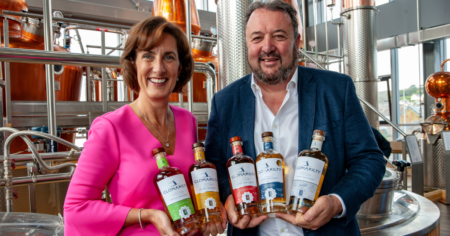 The UK is the newest market entered by the distillery, who already export to Germany, Italy, Austria, Belgium, The Netherlands, Japan and Russia, as well as twelve US states and two Canadian provinces.

The Clonakilty Distillery commenced distilling in 2019 and in its first year was awarded World’s Best Irish New Make Single Pot Still at the World Whiskey Awards 2020.

The distillery which is located by the waterfront in Clonakilty, currently produces three Irish whiskey bottlings in its Cask Finish series; Double Oak, Port Cask and Single Grain Bordeaux. It also produces Minke Gin, which is inspired by the Minke Whale, who swim off the Atlantic coastline.

Commenting on the news, Michael Scully from the Clonakilty Distillery, said:

“As a genuine Irish Atlantic Ocean distillery, we feel our award-winning spirits offer a pretty unique experience for discerning consumers. We are excited to be working in partnership with Mangroves and expanding our offerings into the UK market.”