Eight young people from Gaelcholáiste Mhic Shuibhne in Knocknaheeny, North Cork City were honoured for their creativity in STEAM (Science, Technology, Engineering, Arts and Maths) at the 2020 ESB Creative TechFest.

Sophie Stewart, Ruby Cullen, Julie Duffy, Sean Healy, Erin Egan, Shane Power, Thomas Coffey and Callum Gately (pictured at Tech Féile earlier this year) took home the ‘Creative Computer Crossover’ award in the Computer Science category for their project ‘Remote Control Forklift’. The judges were hugely impressed by the innovation and use of coding for creativity in their project. 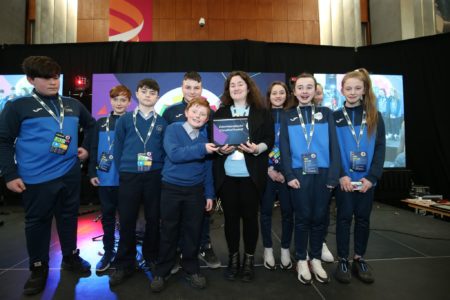 Over 1,000 young people, aged between 10 and 18, from youth clubs, schools and gaelscoileanna across Ireland, took part in the first-ever virtual ESB Creative Tech Fest, the annual bilingual event celebrates the innovation, creativity and collaboration of young people who participate in TechSpace programmes nationwide across STEAM, digital creativity and computer science projects.

TechSpace is a creative technology education programme that is managed by social enterprise Camara Ireland and delivered in the informal and formal education sectors. It encourages young people to unlock their passions and potential through the creative use of technology.

The awards, hosted by TG4 presenter Micheál Ó Ciaraidh, were broadcast live from Carlow Arts Centre. There were 17 winners honoured in categories across creative computer science, digital creativity and STEAM.

In addition to the awards, an innovative Virtual Reality exhibition showcased all the project work, and there was entertainment with performances from young Irish bands and inspiring TechTalks from TikTok stars Chris is Ainm Dom and Cairde.

Pat O’Doherty, Chief Executive at ESB, outlined his admiration for the young people involved in this year’s ESB Creative Tech Fest awards: “It is both reassuring and inspiring to see the innovation and creativity in the projects submitted for this year’s awards, and we congratulate each of the nominees and winners for their work. Every young person in the TechSpace programme should be hugely proud of what they have achieved, in such challenging circumstances, this year.”

Marianne Checkley, CEO of Camara Ireland said ensuring the awards went ahead virtually was a key priority: “There has been some hugely inspiring projects despite the really difficult circumstances this year and, despite us not being able to be together in person, we wanted to bring the network together virtually, to celebrate the quite incredible achievements of educators and young people this year.”