The huge success of the Liam Miller fundraising event, raising in excess of €50k for charities, visiting over 100 schools in Cork with an ‘I Can’ message and historic events marking milestones in the evolution of the city are among the standout memories recalled by former Lord Mayor Cllr. Mick Finn in a new book.

The book was launched by Lord Mayor Cllr Joe Kavanagh and Lady Mayoress Stephanie in the Lord Mayor’s Chambers. 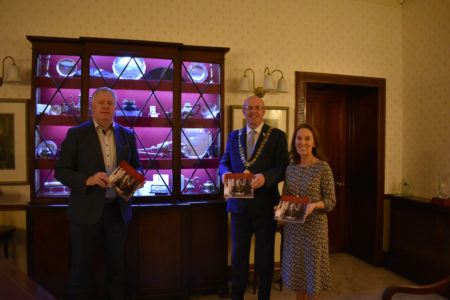 The first independent Lord Mayor of the City since 1945, Cllr Mick Finn took up the mantle in June 2018 in the final year of the council’s five-year term and embarked on an action-packed journey that highlighted the best that Cork had to offer. He also became the first Lord Mayor in the new, expanded city following the boundary extension before handing the reigns over to Cllr John Sheehan.

“It was a whirlwind year and one which I will remember to my grave,” Cllr Finn stated. “It had so many highlights that it really is impossible to single out even some. To have followed in the footsteps of iconic figures like Tomas MacCurtain and Terence MacSwiney and become Lord Mayor of the City was such a huge privilege…and even talking about it now, 18 months on and in the 100th year of their deaths, underlines that feeling all the more.”

The book is a photographic review of events from the year, with speech extracts from some of the Lord Mayor’s hectic event schedule. Cllr Finn said he produced the book to document his time in office and with a view to raising funds for two causes close to his heart.

“Documenting of my year in office is in fact providing a snapshot of a year in the life of the city, with so much incredible work done by so many across all sectors…I think it is important to record that for posterity,” he said. “I produced the book myself and it contains some of the words and images synonymous of my year in the hot seat including Christmas fundraising events, cycling in the St Patrick’s Day parade, the Lord Mayor’s Community & Voluntary awards, initiating the Cork Culture Award, bringing a message of resilience to thousands of Cork school students, attending sports fixtures, concerts and launches as Cork’s First Citizen and welcoming President Higgins and the cabinet to the city.

“I only printed a small number of copies so it’s not really for general sale but I’m hopeful that if people want it, they will donate a few Euro when they pick up a copy which I will direct towards the Life Centre and the Deis Scop School Completion Programme.”

Cllr Finn, who retained his seat in the election at the tail end of his year as Lord Mayor with the highest percentage vote across the city, thanked all those who made his year possible.

“Only someone who holds the office of Lord Mayor will understand the work involved and the respect that is there for the office and I thank all those who interfaced with it over my year for making it such an honour: I also thank all the council staff who helped me as well as the members of the media – journalists and photographers – who helped to communicate the work to the public.”

A limited number of books are available from the Lord Mayor’s office at City Hall or from contact Mick on mick_finn@corkcity.ie.