The Courtmacsherry All Weather Trent Class RNLI Lifeboat was called out this afternoon at 4.10 pm at to go to the immediate aid of a windsurfer who got into difficulty over one kilometre from shore off Garrylucas Strand near the Old Head of Kinsale in West Cork. The Courtmacsherry Lifeboat under Coxswain Sean O Farrell and crew of 4 were underway within minutes and proceeded at full speed to the area of the causality in rough conditions at sea this afternoon. The Lifeboat reached the causality, who was being blown out to sea, within 15 minutes, and the Crew immediately plucked him from the choppy seas to the safe surround of the Lifeboat. Once on board the Lifeboat and assessed by the crew, he was immediately wrapped in blankets etc and brought back at speed to the Courtmacsherry Harbour Pontoon where he was transferred to the RNLI Station House for some further observation in a warm surrounding. He was really glad to be safely on shore and appreciated some hot drinks from Station Crewman Micheal Hurley, after a difficult 45 minutes in the cold rough water. The conditions at sea this afternoon were difficult with offshore winds haven risen in the afternoon and a rough sea developing.

Thankfully a happy ending as his Mother travelled by Car to collect him from the Stationhouse, with both praising the swift action of the RNLI Lifeboat in carrying out the rescue. The Coastguard Rescue 115 Helicopter was also tasked to assist in today’s incident. 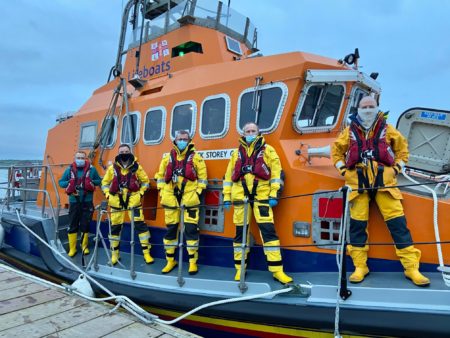 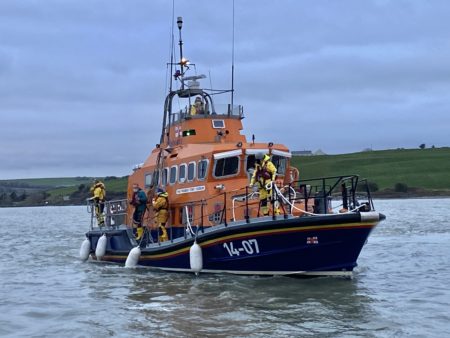 Commenting on the callout, the Courtmacsherry RNLI Voluntary Lifeboat Operations Manager Brian O Dwyer thanked all the Lifeboat voluntary crewmembers for the quick response to the Station’s second callout in 24 hours, and carrying out the Rescue so quickly in difficult conditions. He reiterated that is so important to call the rescue services at 112 or 999 quickly once any incident like this occurs and this resulted today in a very fast response to the scene by the rescue services.

The Lifeboat has now returned to its base in Courtmacsherry just after 5.30 pm and has refuelled and re stocked, in readiness of whenever the next call to action may occur. This has been the second callout in 24 hours by the Courtmacsherry RNLI Lifeboat.