A short film by a Kerry writer, director, and University College Cork graduate is in contention for an Oscar nomination, after securing a place on the Academy Awards’ 2021 longlist.

Shaun O’Connor’s ‘A White Horse’ tells the story of a scared and confused young girl in 1970s Ireland who enters a phone booth and rings home. Her parents are waiting for the call, and the conversation slowly reveals a hidden truth. 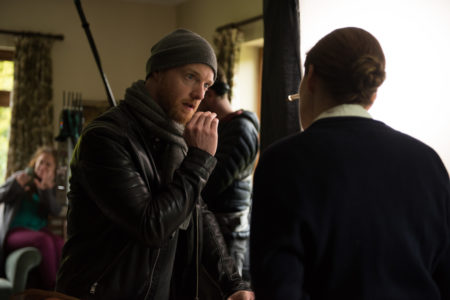 ‘A White Horse’ stars Cora Fenton (The Young Offenders) and newcomer Amber Deasy, and was made with the Screen Directors Guild of Ireland ARRI Take Award. Filmed in Cork city and county, the story explores how mental hospitals were once used as catch-alls for people considered ‘troublesome’ or ‘abnormal’.

Among the accolades garnered to date, ‘A White Horse’ won the award for Best Irish Short at the Foyle Film Festival in November 2019 – recognition that has led to a coveted place on the longlist for the 2021 Oscars.

Shaun, a UCC graduate of the MA in Film Studies Class of 2006, was inspired to explore this subject after discovering that gay conversion therapy was widespread in the British Isles in the 60’s and 70’s, and incredibly, is still legal in the UK and Ireland.

The director said his time in UCC had a formative impact on his successful career:

“The team and I behind ‘A White Horse’ are thrilled with the success of the film. Even though it’s an Irish story, it’s been amazing to see how much audiences around the world have responded to it,” Shaun said.

“At Irish festival screenings we inevitably had people approach us afterwards to tell us how they related to the film, either in terms of their own past experiences or that of family members. To have the film speak to people like that, and also do so well on the international stage, has been incredibly gratifying.

“My time at UCC was pivotal in my filmmaking career. Doing the MA in Film Studies there introduced me to so much film history and gave me new ways to interpret and appreciate the medium. It was a formative experience. And the college, course and lecturers have all been incredibly supportive of my work in the years since,” he said.

Dan O’Connell, Head of the Department of Film and Screen Media congratulated Shaun on his accolade.

“We couldn’t be happier for Shaun. Though he finished his studies with us many years ago, he is still a familiar face on campus both as a practitioner who shares his expertise through masterclasses and as a keen attendee at our many conferences and workshops. He has always been a great ambassador for the Department of Film & Screen Media.”

Dr. Gwenda Young, Coordinator, MA in Film and Screen Media, Department of Film and Screen Media said the Department is thrilled to learn of Shaun’s success.
“We have watched Shaun’s career go from strength to strength and we’re so proud of his achievements and honoured that we had the opportunity to teach him all those years ago! Shaun is a most valued UCC alumnus, and his powerful and evocative A White Horse deserves all the acclaim and admiration it has been garnering.”