The sight of an Irish team anywhere beyond the qualifying rounds of a European competition is seen as a great endorsement of grassroots football in Ireland.

Invariably though, that is as good as it gets, even though some teams in the past have had the privilege of facing a titan before bowing out. Only last summer, Shamrock Rovers faced off against AC Milan during UEFA Europa League qualification, with the club claiming a moral victory in going down by a scoreline of ‘only’ 2-0 with goals from Zlatan Ibrahimovic and Hakan Calhanoglu.

In the autumn, it was Dundalk’s turn to represent Ireland, and they found themselves up against the might of eventual group winners Arsenal. It was a resounding ‘nul points‘ in Europe for the Lilywhites, who finished last behind Rapid Vienna and Molde.

Their inevitable elimination ended Ireland’s interest in the UEFA competitions for another year, but here, we look back at one of the best European nights involving Cork City, and what happened next. 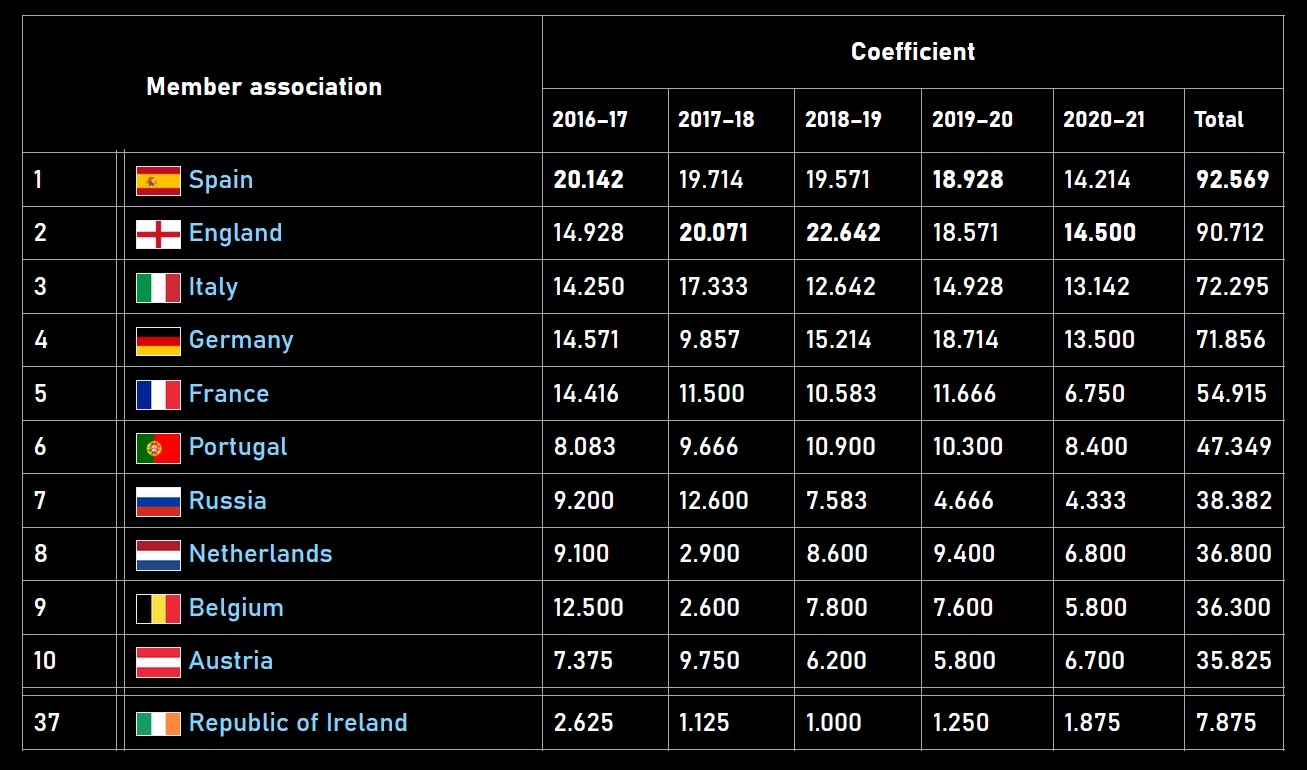 Correct as of February 2021, Ireland’s place in UEFA‘s member‘s association coefficient table shows the gulf between them and the best sides in Europe.

Cork City’s humble European record is a far shot from the stardom associated with top level tournaments across the world, and the latest live sportsbook odds surrounding them. Even so, it was only in their second-ever foray into Europe, during the 1991/92 UEFA Cup, that Cork met present-day European champions Bayern Munich.

Mick Conroy shone in particular for Cork, rolling back the years despite being only a reserve and a player-coach. In the 26th minute, he stole the ball off former Brazil international Bernardo, and fed a killer ball through to Dave Barry, who then dispatched beyond Gerald Hillringhaus to give Cork City a lead celebrated around the world.

Bayern, containing the likes of Christian Ziege and the Bundesliga’s top scorer of 1990/91, Roland Wohlfarth, had been suitably riled. It was with a distinct sense of inevitability that they equalised a mere sixteen minutes later, when German international midfielder Stefan Effenberg slotted home, albeit from a fortunate rebound after Thomas Berthold’s shot was blocked.

Mazinho – a future World Cup winner – nearly won it for the German giants, but Cork goalkeeper Phil Harrington played the game of his life to see out the ultimate moral victory. Unfortunately, Bayern won the second leg 2-0, but were humiliated 6-3 on aggregate by Danish minnows Boldklubben 1903 in the following round.

Champions League – and the rest

Two years later, Cork made their only prior foray into the Champions League proper, meeting Galatasaray in the first knockout round under the old format. Prominent amongst the Turkish champions was Hakan Sukur, a man who bled goals in his prime, but he was kept well-marshalled by the Cork backline over 180 minutes of David vs Goliath action.

Nobody can blame Cork for being overwhelmed by the febrile atmosphere of the Ali Sami Yen Stadium, going 2-0 down to an Arif Erdem goal early in the second half. Yet, they fought back with a potentially vital away goal, courtesy of Dave Barry, the man who had stunned Bayern two years previously.

The return leg at Bishopstown Stadium was similarly close-fought, and it took a 76th-minute goal from Kubilay Türkyilmaz to settle the tie:

The following years brought little more than fleeting brushes with qualifying rounds, and random appearances in the now-defunct UEFA Intertoto Cup – a minor summer tournament and a former method of qualifying for the UEFA Cup, prior to its 2009 rebrand as the UEFA Europa League.

The only highlights of note since the start of this century are Cork’s first continental away win (1-0 vs Malmo in the Intertoto Cup first round of 2004) and a double legged UEFA Cup first round defeat to Slavia Prague in the following year. The 2004 Intertoto Cup also marks Cork’s last game without defeat to a club in the top ten of UEFA‘s member‘s association coefficient table, with former Reading (and English Premier League) striker Kevin Doyle opening the scoring vs French side Nantes in a 1-1 draw.

Key stats – and an uncertain future

With a win rate of nearly 25%, and a return of almost exactly twice as many goals conceded vs scored, Cork’s European record is par for the course where Irish clubs are concerned. It could be a long time until they return, but efforts to bolster the playing squad remain in full flow, as the club seeks to regain top-flight status in 2021.

Cork City have also won just once against a team from a nation currently in the top ten of UEFA‘s member‘s association coefficient table, doing so back in the Intertoto Cup back in 2004. Even then, that triumph came against a relatively small Dutch club in the form of NEC Nijmegen.

If the Intertoto Cup is considered a bona-fide tournament, then 2007 remains the last time Cork City appeared in a competition proper. Given how poorly Irish teams generally perform beyond qualifiers, the launch of the UEFA Europa Conference league in 2021/22 is likely to be Ireland’s best hope of any sustained representation on the continent.

Only time will tell if Cork City’s memories of great European nights can sufficiently fuel a surge back into the top-flight, and drastically herald the necessary upturn in domestic fortunes thereafter.