Two lucky EuroMillions players in Co. Cork got their weekend off to a winning start after they both matched five numbers and one lucky star in Friday night’s EuroMillions draw to scoop the €123,876 prize on offer. The National Lottery have confirmed that the winning tickets, both Quick Pick selections, were sold at the Bandon Books store at the Riverview Shopping Centre in Bandon and at Gannon’s service station in Newmarket in north Co. Cork.

Both of the Cork players narrowly missed out on scooping the €60,764,885 by one Lucky Star (numbered between 1-12). There was no winner of the jackpot which now rolls to an incredible €70 million next Tuesday.

The Bandon Books store is no stranger to big EuroMillions wins, having previously sold a €1 million EuroMillions Raffle prize as recently as August 2020. Carmel Hayes, operator of Bandon Books store has appealed to all of her customers in Bandon to check their tickets to see if they are sitting on a EuroMillions fortune. She said: “What a way to start the weekend for one of our customers. We got the call with the good news from the National Lottery last night and Bandon town has been absolutely buzzing since. As a retailer, there is an incredible sense of satisfaction selling a big winning lottery ticket to one of your customers. We’re getting a lot of hopeful locals coming in to check their tickets this morning so hopefully the winner will be aware of their win at this stage. With lockdown restrictions, it’s more than likely to be a local but whoever it is, we hope that they enjoy every bit of the win.”

With over 72,000 prize winners in Ireland in Friday night’s EuroMillions draw, the National Lottery has urged all of its’ players to check their tickets carefully, particularly those who played their tickets in Co. Cork.

The winning ticket holders are advised to sign the back of their ticket and to get in touch with the National Lottery claims team on 1800 666 222 or email claims@lottery.ie and arrangements will be made for them to claim their prize. 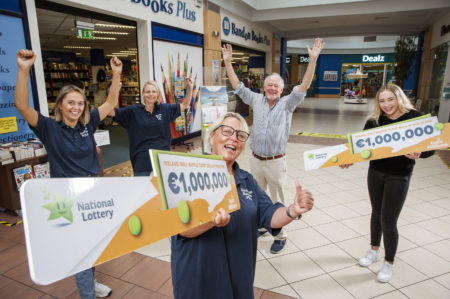 File pic from August 16th 2020 when the National Lottery announced that a bookshop in Bandon, Co. Cork as the location which sold a EuroMillions ticket worth €1 million. Fast forward to March 12th 2021 and the shop has sold another winner! Pic: Daragh Mc Sweeney / Mac Innes Photography