Ernest Cantillon from Kinsale Spirit Company, shopper Claire McLaughlin from Blackrock, and Michael Creedon of Bradley’s Specialist Off-Licence and Foodstore, North Main Street, Cork, celebrated a major milestone for Kinsale Gin as Claire was the purchaser of the 100,000th bottle, providentially in the first store that stocked the drink when it hit the shelves in 2016. 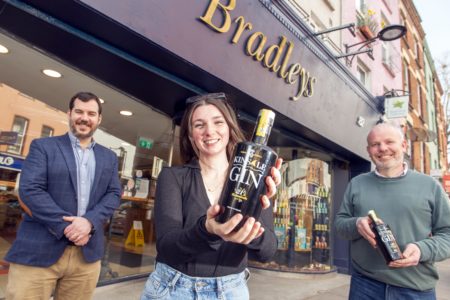 Claire said: ‘I am thrilled to be the person who bought the 100,000th bottle. I have loved Kinsale Gin from the very start so it was such a lovely surprise to be part of this monumental moment for the brand, and of course Bradley’s too!’

As a thank you, Kinsale Spirit Co., are treating Claire to a weekend away, in Kinsale, where she will be spoiled with some of the things that makes Kinsale so special to them – a meal from Fishy Fishy, chocolates from Koko’s, and of course, the small batch premium Kinsale Gin.

Speaking about this outstanding achievement, Michael Creedon of Bradley’s said “we are delighted to have sold the 100,000th bottle of this fine drink, back here where it’s story all began. In 2016 we put the first 100 bottles of Kinsale Gin on shelf, and it sold out within a week. It’s important to us to stock the very best quality produce from the Cork region – a gin distilled using botanicals hand-picked around Kinsale? You can’t beat it.”

Publican and entrepreneur Ernest Cantillon adds “I’m sure some of the other brands sell a lot higher quantities, but for us this was a very big deal. Our thanks to Michael, Claire, and to all of our customers for the support in getting us here.”

Kinsale Spirit Company came about when Kinsale native and publican, Tom O’Riordan realised that the town of Kinsale, known for its excellent food and drink, felt a locally produced spirit product would both benefit from, and help, this international reputation. He also noticed the emergence of gin in the craft spirit category and along with his sister Clodagh, and friends and fellow publicans, Ernest and Colin Ross, began the journey that resulted in Kinsale Gin. The first batch was released in 2016, 100 bottles and only for sale in Bradley’s Off-licence. It sold out in a week, encouraging the Kinsale team to press on with the venture.

The move into Whiskey production was a natural progression and they launched Red Earl Whiskey in April, 2020. Kinsale Spirit Co., look to be producing 300,000 bottles per annum, producing Irish Whiskey, Gin, and other spirits in time.

Kinsale’s Red Earl is already being exported to several countries, including strong sales in the US and China. Work is under way for the delivery of two more whiskeys later this year: Great Earl Single Grain Irish Whiskey named in honour of Hugh, The Great O’Neill, and Spanish Earl Single Malt Irish Whiskey, in honour of Juan del Agula, representative of the King of Spain who fought alongside the Irish.