Award-winning RTÉ broadcaster and author John Creedon has been named Cork Person of the Month for June. John receives the award for igniting a new love of Ireland and its place names, through the RTÉ television series “Creedon’s Atlas of Ireland” and bestselling book “That Place We Call Home” published by Gill Books. 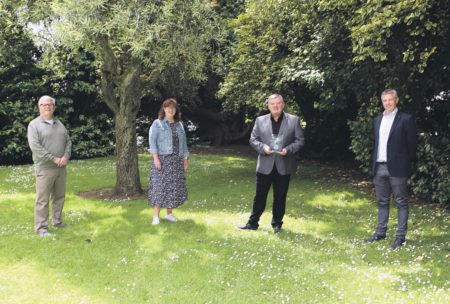 John’s interest in Irish heritage and fascination with place names is long-established. The author studied Regional Studies and Folklore at University College Cork. At the award presentation, John announced that a third series of ‘Creedon’s Atlas of Ireland’ will begin production this year.

Speaking about his work and the award, John Creedon said, “RTÉ has committed to a third series of Creedon’s Atlas of Ireland. We film over the Summer, with programmes being transmitted next year. I am delighted to accept this great award on behalf of the Cork RTÉ team, who do most of the hard work! Much of our success comes down to them.”

Speaking about the winner, awards organiser, Manus O’Callaghan, said, “John is a natural storyteller. His TV series and book share the layers of meaning behind place names of Ireland’s 63,000 townlands and reveal stories about our country and the people who walked it before us. Place names reveal a lot about who we are and our history. John’s work helps us better understand that heritage.”

In recent years, John has become well known for The John Creedon Show on RTÉ Radio One, an evening programme broadcasting contemporary Irish and International tracks from RTÉ’s Cork studio. John’s work attracts a large international audience, from his home place of Cork.

John Creedon’s name now goes forward for possible selection as Cork Persons of the Year at the annual Gala Awards Lunch which will be held at the Rochestown Park Hotel on January 21st, 2022.

This is the 28th year of the Cork Persons of Year awards scheme.