Pirate Anne Bonny Returns to her hometown of Kinsale

Following the presentation of the idea to paint the steps by the Kinsale Tourism and Business Association, the Council sought submissions of ideas from the public, from which the theme of Anne Bonny was chosen. The painting was funded through the Bandon Kinsale Municipal District Town Development Fund and artists “Splattervan” were chosen to undertake the project. 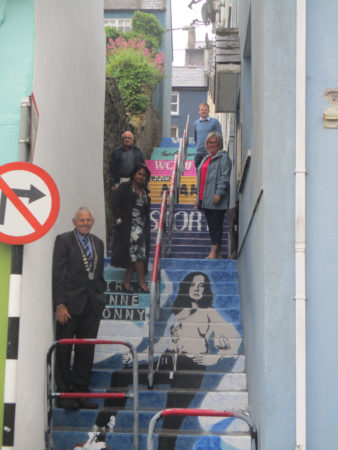 Anne Bonny was born near the Old Head of Kinsale at the end of the 17th Century, and her life is shrouded in mystery, folklore and adventure. Stories survive of defying her father’s wishes, marrying for love, divorcing and taking to the high seas as a pirate at a time when women were considered to be bad luck on board a ship.

At the unveiling of the mural on the steps, Cllr. Kevin Murphy, Chair of Bandon-Kinsale Municipal District, said

“The wonderful harbour town of Kinsale has benefited from another beautiful addition through this painting. These steps, favoured by visiting photographers, now boast a mural which will resonate with many locals and visitors to Kinsale today. Legends of Anne Bonny, one of the town’s most illustrious expats, resonate with the rebels and adventurers in us all, and the artists have done a remarkable job in bringing this legendary Irish Pirate back to her home on the Wild Atlantic Way.”