The Port of Cork and Independent Container Line (ICL) jointly celebrated the shipping services first year in operation, in what can be described as a record first year. The direct deep-sea route which operates between Cork and US (East Coast) is the only direct route out of Ireland connecting to the USA. 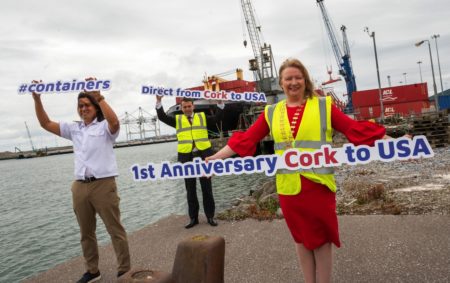 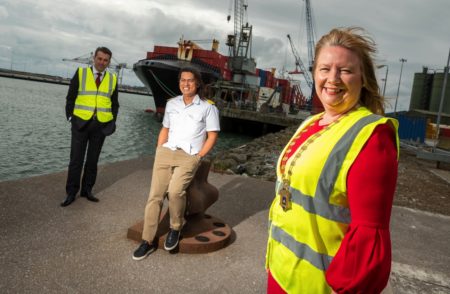 Paul Sanders, ICL General Manager UK & Ireland said: ‘We’ve been very pleased with how our first year, calling directly into Cork, has developed. It has been especially pleasing given this has been done during a pandemic, which meant we could not visit or hold face to face meetings, ahead of starting the service. It’s a testament to the great partnership we’ve developed with the Port of Cork, that we have been able to make this happen.’

Connecting Ireland and the USA with a direct service made complete sense to ICL, and as a specialist North Atlantic carrier, ICL were perfectly suited to do this.

Mr Sanders continued: ‘The last 12 months has demonstrated not only our commitment, but our industry recognized schedule reliability, and we only see further growth. ICL’s export volumes from Ireland have grown 500% during our 1st year, with import volumes also hugely increased, and we are continuing to see expansion as the year progresses.’

Conor Mowlds, Port of Cork’s Chief Commercial Officer congratulated ICL on their first year in operation saying: ‘The Port of Cork are delighted with the success of this direct route to the US which greatly enhances our Port connectivity. With Cork Container Terminal in Ringaskiddy on the horizon, we have the potential to further support ICL and grow cargo volumes from and to Ireland. This is a fantastic strategic development for the Port of Cork as we look to develop Ringaskiddy as a modern logistics hub.’

Seamus Fives, Site Leader, Pfizer Pharmaceuticals (Cork) and Chair of AmCham’s Southern Region said: ‘As the voice of over 800 US companies in Ireland, representing key exporting sectors such as Pharmaceuticals, ICT and Medical Technologies, the American Chamber of Commerce Ireland congratulates Independent Container Line(s) and the Port of Cork on the first anniversary of their direct shipping services to the East Coast of the US.’

He continued: ‘The value and importance of Ireland in Global Supply Chains have been reinforced throughout the pandemic. Ireland ranks 5th in the world for global exports of Covid-19 related goods. The Cork Port route to the US has offered greater accessibility for the movement of goods and services, which further strengthens our position as a global location of choice for inward investment.’

ICL have a long-established relationship with agent, Johnson Stevens (with offices in Dublin and Belfast) who handle all ICL’s operations.

Martina Creamer, Joint MD of Johnson Stevens said: ‘We are hugely proud to be managing this ground-breaking Trans-Atlantic service for ICL and have been delighted with the support from the Irish shipping community. We look forward to the new Cork Container Terminal opening soon, and further developing this great service.’