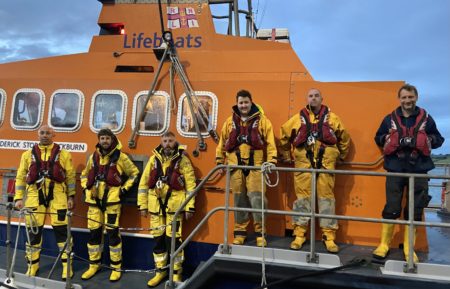 The Courtmacsherry All Weather Trent Class RNLI Lifeboat was called out this evening Friday at 5.45pm, to go to the immediate aid of a lone Kayaker that was spotted in trouble off the Old Head of Kinsale in West Cork. The Courtmacsherry All Weather Lifeboat, Frederick Storey Cockburn under Coxswain Mark John Gannon and a crew of 6 were away quickly from their moorings, when Valentia Marine Rescue Co-Ordination Centre bleeped for immediate action after golfers on the Old Head of Kinsale Golf Links saw a person in trouble near the rocks on the western side of the Lighthouse. The Kayaker had left The Speckled Door pier earlier in afternoon and came through the passage at Hole-Open and was attempting to round the Lighthouse when the weather worsened and he was thrown off the Kayak and was unable to re mount because of high swells. Thankfully the Golfers immediately called the rescue services and the Courtmacsherry RNLI Lifeboat and its voluntary crew were away within minutes. Reaching the area at 6.14 pm, two members of the crew, Ken Cashman and Donal Young used the Lifeboat’s small inflatable boat to traverse into the rocky inlet under the Lighthouse and pluck the causality from the water and brought him back to the main Lifeboat where he was assessed and warmed up after a very frightening ordeal. Unfortunately the Kayak could not be recovered and all his belongings including mobile phone and keys were left to the mercy of the sea. The conditions at sea this evening were 4 meter swells and a strong westerly wind. The causality was then brought by the Lifeboat to the safe surrounds of the Courtmacsherry Pontoon and he was mighty glad to be on safe lands again. Crew and Station officers assessed him further at the Station House and provided him with a change of clothes and hot drinks before Station officers were able to take him back to meet his friends who came from North Cork to meet him. Also tasked in today’s Callout was the Coast Guard Rescue 117 Helicopter from Waterford and the Old Head / Seven Heads Coast Guard unit.

The Courtmacsherry RNLI Lifeboat voluntary Lifeboat Operations Manager Brian O Dwyer said “We are all so relieved that the Kayaker was rescued so quickly in tough seas off the Old Head this evening and praised the Golfers on the Old Head for making that quick 999 call when they realised something was amiss”, he also thanked the voluntary crew at the Lifeboat Station who quickly assembled and with great skill that they regularly train for, prevented a very serious incident at sea this evening.

The Lifeboat has now refuelled and re stocked, in readiness of whenever the next call to action may occur.